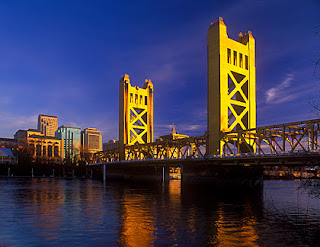 I've been absent because I've been a little busy.  Last Saturday at 2:45 p.m. I set out on what I hope to be the greatest adventure of my life.  I accepted a position to work as the night side executive producer at KXTV in Sacramento, California.  The station is in a battle to be the market leader.  It is owned by Gannett.

The man who hired me, Tim Geraghty, has a lot of major market experience in the news director's chair.  We started talking more than eight months ago about the possibility of me making this trek west across the country and join him in his efforts to place the news operation firmly in the 21st century.

The drive to Sacramento took four days and covered more than three thousand miles.  I am happy to report that it was largely uneventful.  I had to sit in bad traffic for a crash in Mobile, Alabama and for another accident in New Orleans.  Once I hit Texas the drive was pretty unremarkable except for some stunning scenery.  Even parts of God forsaken West Texas offer a kind of lonely beauty.

The highlight of the drive occurred in Amarillo.  Beginning at the Texas state line these large billboards trumpeted the 72 ounce steak at the Big Tex Steak Ranch.  It's free if you can down it with the trimmings in one hour.  My buddy Dave Parks and I had enjoyed many discussions about that particular restaurant and what it must take to consume a hunk of beef that size.  Now every few dozen miles these billboards heralded the approaching piece of meat.  I called Dave in excitement about Big Tex and he convinced me that it was a must see part of my journey.

I rolled into Amarillo right at dinner time and as luck would have it Big Tex sits right along I-40.  The God's of all things steak must have been smiling on me because shortly after I sat down a young man stepped up to challenge the 72 ounce steak.  While I chowed down on my ten ounce ribeye I watched as this 20 something chewed his way into history.  I took some pictures with my cell phone camera but I can't download them yet.  I didn't stick around for the finale because with 20 minutes to go he still had half of the steak left.

The only other surprise was just how mountainous I-40 is west of Flagstaff.  Had the Czarina or I known this we would have sweated a lot more about Andrei's trip with his Jimmy pulling a trailer from Illinois to Riverside, California last year.  I don't know how the 11 year old Jimmy made it, although it should be noted the Andrei did put a new engine in the SUV somewhere in Missouri when it gave out in the early stages of the trip.  I tip my hat to my step-son for making it.

It was fitting that the first song that played on my great journey was Bruce Springsteen's "Ghost of Tom Joad."  It was amazing driving up the San Joaquin Valley.  It is a non-stop vista of American agriculture.   It was a fitting way to cap off my cross country journey.

Now I have a new home, a new job, and wait only for my wife to eventually join me in the Golden State.
Posted by Rink's Ramblings at 8:59 PM