Formal practice for high school cross country is just around the corner.  The teams that will dominate  have already put in a summer's worth of work in June and July.  Then there are the coaches that know how to coach and whip kids into shape who are short on miles that manage miracles year after year.  But unfortunately the majority of schools employ coaches who can't make the time commitments to ride herd on their athletes through the summer and allow their teams to become fodder for those who put in the miles. 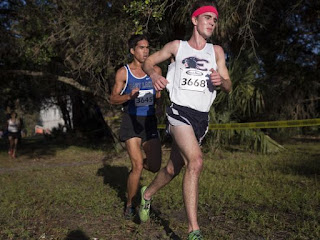 Since I've lived in Southwest Florida, Estero High School has been the dominant school when it comes to boys and girls cross country.  The late, great Jeff Sommers believed in working hard and working early though the hot, humid months, that dominate the weather here.  His athletes were up well before dawn putting in the kind of miles that leads to success.  That recipe has stayed in place under the current regime at Estero led by Brian Olitsky.

Over the last half decade the only area school to consistently challenge Estero's dominance has been Fort Myers High School.  This year both the boys and girls team will be shepherded by Yancey Palmer.  Since Palmer's arrival the Green Wave have proven to be a major rival to Estero.  This season should be no different.

Looking first at the boys side the bright spots are Estero track star Hugh Brittenham and proven cross country challenger Kyle Skinner from Fort Myers.  Brittenham wants to put a stamp on his historic career by showing that he can bring to cross country what he's brought to the 800 and 1600 where he's stamped himself as the greatest distance runner in Lee County history.  Skinner, entering his junior campaign, will prove to be a gritty rival and seems better suited for the rugged toughness that cross country running demands.

Among the Lee County girls only one seems to stand out.  Jessica Edwards, a super 800 runner, appears poised to elbow her way into the conversation when it comes to all time cross country runners in Southwest Florida.  As good as Krissy Gear was as an all round distance runner, in the last decade Estero's Bona Jones and Community School's Kathryn Fluehr remain the gold standard in girls cross country.

The strongest team boys or girls appears to be the ladies competing for Naples High School.  They finished 7th at state each of the last two years.  Given the extra year of experience for the slew of freshman and sophomore that make up the Naples roster they could make a charge for the podium.

The wild card as we head into this season is the amazing building program led by Jorge Fleitas at Bishop Verot High School.  The Vikings could be the surprise team in Southwest Florida.  I say this based solely on the number of athletes from his store coming into my store buying shoes.  I've never seen such a procession of runners coming from Verot committed to putting in the miles over the summer.

Stay tuned, the first meet is just two weeks away.
Posted by Rink's Ramblings at 8:38 AM No comments: