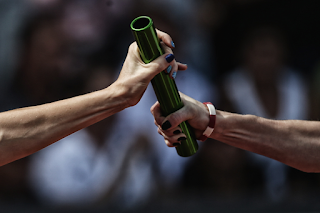 The last weekend of April always features the best that collegiate track and field relay running has to offer. Schools from around the nation always had two choices when it came to putting their best on the track.  The Penn Relays is the grand daddy of such spectacles.  Though largely dominated through the years by Villanova, west coast schools such as Stanford and Oregon would venture east to strut their stuff.

So why in the world did Arkansas decide this weekend would be right for holding what the Razorbacks are calling the National Relay Championships?!?  Sorry, but Arkansas head coach Chris Bucknam is just plain stupid.  The sport has enough trouble getting the public's attention and now Bucknam wants to further dilute the quality of fields competing in Des Moines and Philadelphia.  Arkansas, ironically, has been a relay fixture at Penn.

This reminds me of a hissy fit thrown by the great John McDonnell, another Arkansas track and field coach.  McDonnell felt his squad was cheated at the Kansas Relays in the late 70's and stopped bringing his teams to Lawrence and instead started his own meet to compete against the event.  McDonnell's move was just one of many twists of the knife that put the K.U. Relays into a major decline.

I have no problem with the idea of a big national relay event.  I just have a problem with the schedule.  And given the fact that the Kansas Relays are now just an over-glorified high school meet Arkansas could have scheduled its relay showcase the same weekend as the K.U. event.  That would put the meet two weeks away from Penn and Drake.  Shame on Arkansas.

Posted by Rink's Ramblings at 7:55 AM No comments:

A Boston For The Ages

Shocking, stirring, unbelievable, those words fit Meb Keflezighi's stunning victory at the 2014 Boston Marathon.  The 2018 edition of this fabled race doubled down on this notion.  Des Linden's win over a weather ravaged field proves the old adage of preparation beats talent.  And Yuki Kawauchi's win in the men's race simply amplified that.

First there's Linden, a former track standout from Arizona State, who headed straight to the Hansen Brothers' training group in Michigan after college to focus on the marathon.  Linden served notice in 2011 finishing a close but no cigar 2nd at Boston.  Two Olympic teams would follow but Linden didn't have a major marathon title to show for all of her success.

The win came complete with a shocking detour to help Shalane Flanagan after an emergency potty stop.  Linden slowed to help Flanagan make her way back to the lead pack after the 14 second bathroom break somewhere around mile 11.  Linden admitted she was thinking of dropping out and slowing down to help out Shalene got her head back in the game.

The weather God's gave the gritty Linden the kind of  awful conditions guaranteed to lay the Africans low.  Then there's the moment, the moment Des Linden had to know the race was hers.  She had followed Kenya's Glady Chesir in chasing down Mamitu Daska of Ethiopia after the Newton Hills.  Chesir made the mistake of showing weakness by glancing back just before mile 22.  That's when Linden struck, battling awful, freezing headwinds and rain to win in 2:39:54.  Chesir and Daska would drop out leaving second to an unheralded American Sarah Sellers.

As Linden blew away the women's field by more than four minutes, a drama was unfolding in the men's race were respected, but little thought of Yuki Kawauchi was racing his third marathon of the year, unheard in this day and age for world class runners.  Kawauchi was watching Kenya's Geoffrey Kirui falling apart after a massive attack on the Newton Hills.  The Japanese runner, who has run more sub 2:20 marathons (77) than any competitor in history, managed to close a 90 gap that Kirui had built up over the gradual descent leading to the finish.

With around two miles to go Kawauchi had reeled Kirui in and the race was over.  The Kenyan looked to be jogging over the final miles while Kawauchi seized the day winning in 2:15:58, more than seven minutes off of his lifetime best.  For running fans Kawauchi is especially sweet as he works at a regular job and races often, without any sponsorship support.

Linden victory follows Flanagan's New York City win marking the clear return of American women as a force to reckoned with on the world marathon stage.  And Kawauchi's improbable win ranks on my list up there along with Amby Burfoot's unlikely victory at Boston 50 years ago.  It was a win for a runner who likes to race, not the time trialing marathons we've come to expect at other world majors like London and Berlin.
Posted by Rink's Ramblings at 6:14 PM No comments: