We're a more than a quarter of the way through the college basketball season and I've been remiss in not sharing my thoughts about this year's edition of the University of Kansas Jayhawks.  I guess I've been too scared to share my feelings about this team.  As much as I resist the comparisons, this as close as having a complete unit as what Bill Self served up in the championship run of 2008.

One thing separates this team from the national championship Jayhawks is interior toughness.  Sasha Kahn with a side of Darrel Arthur and some beastly end of the year freshman heroics from Cole Aldrich made the team's interior defense intimidating.  Percy Ellis, Landon Lucas, Jamari Traylor, Hunter Mickelson, Carlton Bragg and Cheick Diallo don't even compare.  Yet the faint glimmer is the unfathomable depth in the Jayhawks frontcourt.  They have a ton of fouls to give and the athleticism of Bragg and Diallo are undeniable.  Ellis can score like Arthur and bring a 3 point shot than even Darrel dare not hoist.

Where this team measures up with 2008 is the front court.  Where Russell Robinson, Sherron Colllins, Mario Chalmers and Brandon Rush were tough as nails, Robinson lacked any offensive punch and the three point shooting while good, pales in comparison to the 2015-16 squad.  Every backcourt contributor on this year's team can shoot the 3.  It's almost to the detriment to Self's bread and butter scheme of working the high/low post.

Yet I think Bill Self has seen that he's got to live and die by the 3 ball.  Wayne Seldon has shown he's worked on his long range shot.  He sparkled at the World University Games.  Frank Mason III has shown every bit of toughness as Robinson and Collins and Devonte Graham will be a better all round player if he stays another year than Mario Chalmers.  Then comes the bombs away overload provided by Brennan Greene and Svi Mykhailuk.  The scariest part is out of this wealth of backcourt talent, the short man on the end of the minutes, Mykhailuk, has the most upside potential in professional basketball. 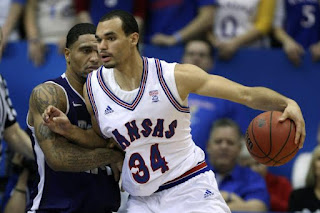 These guys play just enough defense to get by.  They are the best all round shooting team in Kansas history.  That's even with the spotty interior scoring.  Yes, Perry Ellis is hell on wheels, but he struggles against bigger, physical postmen.  Kansas has guards and guards by and large win national championships.  I'm not saying K.U. will win it all this year but this very talented team will have underachieved if they don't make it to the Final 4.

Oh, and if by some miracle Bragg, Diallo, Mykhailuk, Graham and Mason all come back for another season, next year's team will be even better.
Posted by Rink's Ramblings at 8:45 PM No comments:

He Could Coach More Than Football

I went to a high school in Kansas that was a football powerhouse.  A man named Al Woolard put Lawrence High School on the map, even into the pages of iconic Life Magazine.  By the time I got to LHS Woolard was serving as Athletic Director and the school had just hired a dour man out of Ohio named Frank Gibson to coach the Chesty Lions.

Gibson took a couple of great teams and failed to make the playoffs.  He did it mainly through running off most of the African-American players at a time that racial strife still haunted the school in the early 1970's.  By my senior year, the fall of 1973, the program, still full of talent, was in a shambles.  That team managed 1 win against 8 losses and fortunately Frank Gibson was shown the door.

I saw just about every Lawrence High game over the next four years as I worked my way through college helping out at the local cable TV station that showed all of the Lions games on tape delay.  Freeman made football at Lawrence High fun.  His first couple of years he had to teach the kids how to win again.  You could see the love his athletes had for him.  Even the African-American players bought into his down home, one for all and all for one approach.

It took 5 years but Freeman finally claimed the first of 5 state football titles in 1979.  He returned the program to greatness that would extend well past his retirement into the 1990's.  Freeman made a lot of Lawrence High grads proud to be Lions again.
What really impressed me about Bill Freeman was his love of track and field.  He was just about as good coaching that sport as he was with football.  The Lions became he track and field power in Kansas when Freeman took control of the team.  He produced great sprinters, jumpers, even distance runners.

Yet I believe the greatest thing he produced was joy.  I would stop by practices time to time beginning in college right up until the end of his reign in the late 80's.  You could see how much his athletes enjoyed being at practice, taking up whatever challenges he would put before them.  Most of all they wanted to win for him.  Not just win for themselves, but for Coach Freeman.  I have rarely seen that kind of affection for a coach.

Alzheimer's disease finally caught up to Coach Freeman.  He was 84.
Posted by Rink's Ramblings at 3:54 PM No comments: