The Underappreciation of Steve Ovett

My summer reading frenzy about running is drawing to a close.  The last book of the four that I've read was written by Pat Butcher and it's called "The Perfect Distance."  It came out more than a decade ago and delves deep into the greatest middle distance rivalry in the last 50 years that pitted to Brits against each other, Steve Ovett and Sebastian Coe.

The book has stirred a lot of memories and feelings I had about these two great milers, both Olympians and world record holders.  It was a rivalry in which fans were certainly divided.  Sebastian Coe was the perfect runner.  His speed was amazing.  He was smart, erudite and a media darling.  Ovett was a man born of humble beginnings, ran like a runaway freight train, showboated and had an awful relationship with the media.  I loved Steve Ovett. 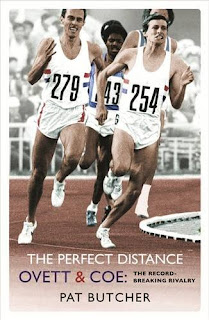 Reading wonderfully written history filled in a lot of holes about my memories of these two middle distance giants.  I first became aware of Ovett at the 1976 Olympics and my feelings were that he was too young and in something way beyond his means.  I would be proven wrong a year later when he dismantled a world class field to win the World Cup, the same year Sebastian Coe first served notice that he was an 800 meter runner of ability.

Their first big head to head race was upstaged by East German Willi Wulbeck at the 1978 European Championships.  Coe showed his inexperience at international racing finishing third and Wulbeck snuck by Ovett for the gold.  The world wanted more but it would have to wait two years.

By 1979 Coe was on a world record setting run, breaking three world records in the 800, 1500 and mile over the course of 41 days.  He would later add the 1000 meter world record for good measure in 1980 with Ovett finally taking away the mile record a month before the showdown of showdowns at the 1980 Moscow Olympics.

If it weren't for Sebastian Coe and Steve Ovett the Moscow Olympics wouldn't have existed for the United States.  President Jimmy Carter's idiotic decision to boycott the games because of the Soviet Union's invasion of Afghanistan ruined the games in the eyes of most Americans besides cheating hundreds of hard working athletes out of Olympic glory.  The British AAA had thumbed its nose at Margaret Thatcher and didn't join in the boycott, thus setting the stage for an 800/1500 clash of the titans.

The 800 was first on the schedule and everyone assumed it was Coe's race, everyone but Steve Ovett.  He literally bowled through the field on his way to gold while Coe was shell-shocked with silver.  Sebastian Coe was devastated but somehow mustered his self-confidence and managed to turn the tables on Ovett in the 1500 taking gold.  Ovett settled for bronze and back in eighth place was another promising Brit, Steve Cram.

Over the next year Coe and Ovett avoided each other.  More and more money was floating into what was supposed to be an amateur sport.  No one could come up with the right amount of cash to get the duo onto the track.  1981 saw the two men exchange world records in the mile.

Then a series of three races between the two was announced for 1982.  Ovett suffered a serious injury during training and then Coe was hurt so the races never happened.  I even purchased a ticket for the final race in the mile set for Eugene in September hoping against hope that the two men would recover for a clash.  Instead, I saw Tom Byers hammer out a tremendous mile against a decent but certainly diminished field.

It wasn't until 1984 I finally got to see the two race at the Los Angeles Olympics.  Coe was on the comeback trail, Ovett was in tip top shape.  But the heat and smog of Los Angeles wrecked havoc with Ovett's breathing.  His Olympics featured multiple trips to the hospital.  He finished dead last in the 800 final while Coe once again had to settle for silver in his best event.

Ovett was warned not to attempt the 1500 by doctors.  His race in the finals ended 350 meters from the finish as he stepped off the track and collapsed.  Coe ran brilliantly again, as he had in Moscow and became the first man to win back to back gold medals in the 1500.  Steve Cram, who was soon to go on a world record spree of his own, took the silver.

Ovett's last major win came in 1986 at 5000 meters in the Commonwealth Games.  He continued to compete until 1991, one year longer than Coe.  British Olympic selectors cruelly refused to allow Coe a chance to defend his 1500 title at the 1988 Seoul Olympics.  Yet he was still good enough the following year to capture the British 1500 AAA title as well as running a super fast 800 under 1:44.

The decade plus span of their careers was pre-internet.  You had to rely on Track and Field News for the latest takes on their running exploits.  You were getting the bulk of the news then, usually a month after it happened.  It only added to the aura and mystery of these two great runners.

Both men are responsible for helping push track and field into a professional era.  There was no denying that they were huge draws wherever they ran.  Both made countless tens of thousands of dollars under the table before the sport finally caught up and made those illegal payments, legal.

Doubtless Seb Coe is the great middle distance runner of the last 50 years.  His range from 800 to 1500 was unmatched.  The dozen or so world records speak for themselves.  But Steve Ovett was the rock and roll rebel who captured my heart.  And the two made for a great decade of racing and record chasing.