The last two weeks of marathon racing has filled my heart with such joy and wonderment that I can't believe what we've all witnessed.  It's two weeks we may never see again and while I rejoice in these incredible accomplishments a small nagging part of me worries about how this happened.  I'm not talking about drugs, but about shoes.  But let's sink in what we saw.

Last weekend in Berlin, Kenenisa Bekele came back from the dead.  He'd been injured, gotten fat and seemed indifferent to trying to put himself on a par in the marathon with a man he owned on the track.  Bekele is in a pantheon of distance that puts him in the same sentence as Nurmi, Zatopek and Gebreselassiese.  His run in Berlin left many who follow the sport reaffirming his place as the greatest ever.  26 World Championship and Olympic medals leave little doubt about Bekele's place in the sport as the greatest ever... on the track. 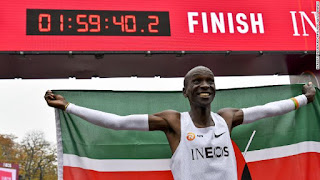 But then Eliud Kipchoge put his stamp on the fact that he is the great marathoner in history, period.  If you haven't watched the sub-2 race effort that took place on Saturday in Vienna it's a must.  It was like watching the painting of a masterpiece.  The race that resulted in history's first sub-2 hour marathon was a work of superb planning and craftsmanship.  The course, the pacers, the technology, all combined for a brilliant piece of running by a man who has no peers in the event.  The time was a breath taking 1:59:40.

Except maybe, just maybe, Bekele could still have a say in all of this.  You see Kenenisa just missed Kipchoge's official world record in the marathon by just a couple of ticks of the clock in Berlin.  If you watched the race you saw a man overcome a rough spot about ten miles from the finish, regather himself and roar to an epic finish.  The world demands a rematch of these two greats.  London would be the idea spot for such a showdown but if that does happen, it will certainly rob the Tokyo Olympics of a great marathon duel.

I can't blame either Bekele or Kipchoge if they pass at a chance at more Olympic gold.  Tokyo will be a death march of epic proportions, much like what we just witnessed in Doha at the World Championships.  It's such a dilemma.  The money for a London showdown would be unbelievable but the Olympics are the Olympics.  I suspect both men will go for the money.  But if Bekele wants to stake his claim as the best marathoner ever, it would take an Olympic win over Kipchoge for him to even enter the discussion.

And as an afterthought Bridget Kosgei basically one upped both men with a stunning world record Sunday at the Chicago Marathon.  Kosgei dismantled a record held by Paula Radcliffe that was once thought untouchable.  She destroyed the record by more than a minute running 2:14:04.  I've never seen an athlete cruise through 26.2 miles and look so in command, except maybe for what Kipchoge had done just the day before.

Regardless, the marathon has entered a new age and that's where it all gets a little fuzzy.  Kipchoge ran his historic race in a pair of shoes not yet available to the public.  It's a spin off of Nike's 4% and Next% that utilizes a carbon fiber plate that acts sort of like a spring.  Kosgei also at the last minute asked to run in the same shoes as Kipchoge and if you don't think a shoe can make a huge difference in how fast you can run then you understand very little about distance running.

So the shoes are making a dramatic difference.  I can't say if it's good or bad for the sport but I suspect the manufacturers have just about dialed in the perfect shoes between Nike's efforts, Adidas Boost and Hoka's Carbon Rockets.  At least that's what I want to believe because the alternative is that they've stumbled upon a super drug that can elude the biological passports that elite runners are subject.  Enjoy this era of distance, because we may never see another like it.
Posted by Rink's Ramblings at 7:12 PM No comments:

But what I find even more frustrating is track and field's reluctance to deal harshly with the cheaters who are caught.  Alberto Salazar has colored outside the lines for more than a quarter of a century.  USADA finally caught up him thanks in large part to Salazar coached athletes who didn't want to cheat and by a coach, Steve Magness, who Salazar used as a human guinea pig.

My first private coach had deep connections to the professional ranks.  I can remember our conversations from the mid-1980's about Salazar's questionable use of supplements and other performance enhancers while he was still a competitor.  Salazar was a win at all costs athlete. 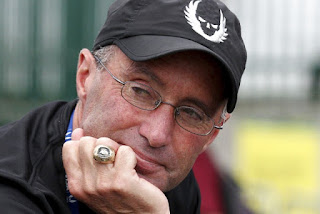 Salazar's first high profile athlete to be busted was Mary Slaney in 1996 for steroids.  Slaney denies that Salazar was coaching her and claimed the positive was due to birth control.  USATF didn't buy it and the ban was upheld and Salazar somehow managed to escape punishment.

If you closely read the USADA report on Salazar's propensity to push the rules it's painfully clear that he was working hard at finding ways to use steroids in ways that were undetectable to testing.  It's called micro-dosing.

When the four year ban came out several high profile athletes including Olympic medalists Nick Willis and Jenny Simpson hailed his ban.  Simpson went so far as to call for a lifetime ban.

Meanwhile Salazar and the deep pockets of NIKE plan to fight the ban in the courts.  Remember NIKE was a major backer of doper Lance Armstrong until the mountain of evidence brought the biking legend down.  And the sport is heavily dependent on NIKE's support and dollars.

The worst of it is the money and medals that Salazar coached athletes have stolen from clean athletes.  What hurts the most is the string of championships and medals by the likes of Galen Rupp, Mo Farah and Matt Centrowitz, Jr. and most recently Sifan Hassan.  As a fan I want to think those medals were earned the right way.  Deep down inside I question their accomplishments.

We will likely never know how deep this scandal runs because unlike in Armstrong's case other cyclists came forward to tell his deepest, darkest secrets, those in the know will keep those secrets near and dear.  It's been that way in the sport since steroids first came on the scene in the 1960's.  And it will stay that way because somehow, some way, the science of cheating always manages to stay ahead of the tests to catch them.
Posted by Rink's Ramblings at 9:05 AM No comments: