I decided to take advantage of my new home and check out a race that I used to dream about running.  It's called the Western States 100.  It starts in Squaw Valley and ends on a high school track in Auburn.  The race uses old mining trails.  The climbs and descents are staggering with the ascents totaling more than 15-thousand feet and the descents than 22-thousand feet.  Runner's experience every kind of weather from the cool that mountains have to offer to desert heat.

Given that the course record was 15:36 held by the legendary ultra runner Scott Jurek I figured I'd be safe if I showed up by 8:30 p.m.  I left the house at 6:45 p.m. figuring it would take an hour to get to Auburn.  Much to my surprise the drive took only 35 minutes.  I stopped in the town's picturesque downtown for a meal.  I could hear the speakers at the high school track ringing through the hills as I walked from my SUV to the restaurant so I knew I was close to where I needed to be.

After ripped through a nice ribeye I made it to the track at about 8:20 p.m.  Much to my shock two runner's had already made it to the finish line, both having shattered the course record.  The winner Geoff Roes from Alaska was comfortably stretched out across the finish line enjoying his new found celebrity. 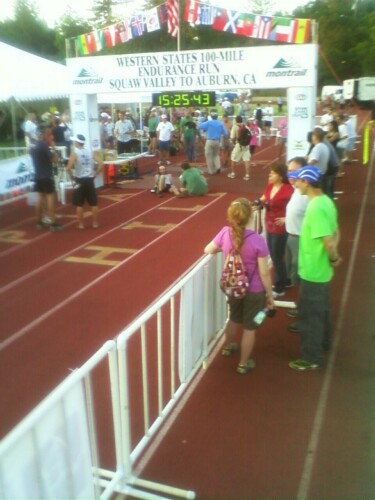 I decided to use my cell phone camera to record the moment.  I emailed the picture to myself marking another historic first.  I had never used my cell phone camera to actually email a photo.  I'm sure the Czarina won't appreciate the charge from Sprint since we don't have a data plan.  Roes shattered the record by almost 30 minutes.  It was still 92 degrees track side when I got out of my SUV so I'm sure the weather was pretty tough.

I stuck around so I could at least say I saw some finishers.  Shortly after 9 p.m. a 22-year-old runner from Spain came across the finish line followed about a minute later by a runner from Fort Collins, Colorado.  It was pretty darn neat.  There were probably 500 or so spectators in the stands and on the infield.  Tents were set up everywhere.  It was well worth the trip.

I wish I knew that I was physically capable of attempting Western States.  I think that time has passed.  But perhaps I can help out sometime in the future as a pacer.  I can't imagine as I sit in my air conditioned apartment at 10:19 p.m. what it's like out there on those mountain trails right now with only a flash light to guide your way.  The only word I can think for doing something like that is courageous.  By the way you get a coveted belt buckle if you finish the race in 24 hours or less.
Posted by Rink's Ramblings at 10:23 PM