Every year I watch a couple of University of Kansas men's basketball games and then try to dissect where the team is headed.  The 2016-17 Jayhawks have more than enough firepower to take a 13th straight Big 12 crown, but I doubt that it has the stuff of Final 4 material.  Last year's squad did and it couldn't get past eventual national champion Villanova.  Last year's squad had depth to die for.  This year's squad, not so much.

Talent wise, starting five, this team is much better than last year's squad.  I'll trade Josh Jackson for Wayne Selden any day of the week and twice on Sunday.  Carlton Bragg is more than an adequate replacement for Perry Ellis.  That leaves holdovers Frank Mason III, Devonte Graham and Landon Lucas, a trio that brings more experience to the floor than any team since the national champion squad of 2008.

But once you get past Lucas and Bragg, the front line choices are horrific.  Udoka Azubike is a man child who has so much potential in the post it's scary.  But after that you are left with Mitch "Gordon" Lightfoot, who is a year away from being a player who can contribute.  Because of this Kansas will be playing four guards, a lot.

The flip side Kansas has the best guard tandem in the country with Mason and Graham.  Their backups would start for 99 percent of the teams in the country.  Svi Myklailiuk will play in the NBA.  His ability to score is unquestioned, this ability to defend, well not so much.  The gem Bill Self who sat unnoticed on the bench much of last year is Lagerald Vick.  This long and lanky off guard can play defense and his game on the offensive end, while shaky, shows promise.

Kansas as it has shown in the first two games of the season will live and die by the foul.  The lack of depth will rear its ugly head on nights when Bragg and Lucas get into foul trouble, which is a sure bet.  The only up side is Kansas is better offensively in the four guard set, especially with Myklailiuk on the floor.

The other worry is Mason.  He was completely worn down by the time March Madness hit.  Self has to figure out a way to manage his minutes.  Given the slim pickings on the bench, that's going to be a tough, tough assignment.

K.U. would have been a Final 4 lock if Cheick Diallo hadn't turned into Cliff Alexander part 2.  At least Cheick is in the NBA.  But in the end, the Kansas Jayhawks will be one tough out when March rolls around.
Posted by Rink's Ramblings at 1:34 PM No comments:

Everything You Know Is Wrong

Firesign Theatre said it.  This season of cross country in Southwest Florida proved it.  Months ago I wrote about the promise I saw on the distance running scene in our area.  I hate to disparage high school kids, but man, it was disappointing.

Let's start with the positives.  Dunbar High School went to state.  It's a school where football rules and where running cross country for young African-Americans can't be considered too cool.  But Coach Joshua Evans lit a spark and this unheralded team ran their way to State.

Then there's Estero.  Don't kid yourself, the program is still trying to recover from the loss of the irreplaceable Jeff Sommer.  Kudos for Ben Pignatone, the boys coach, to being himself.  He swallowed some bitter pills, pulled his boys together and they ran with fierce pride over the last month of the season.  It's his program now.  I can't say enough about how much I respect what he's done.

The runner that never gave in was North Fort Myers Kayla Easterly.  She played second banana to Fort Myer's star Krissy Gear for the last two year.  In their last cross country battle of their prep careers in Florida, Easterly got the upper hand.  She is the most improved runner in our area by a country mile in the last two years.

Finally there's the unending enthusiasm of Riverdale's Dan Whaley and Cypress Lake's Chris Bradway who exude joy when it comes to running. If they can build the numbers in at their schools, both can build programs that could scare traditional powers Estero and Fort Myers. 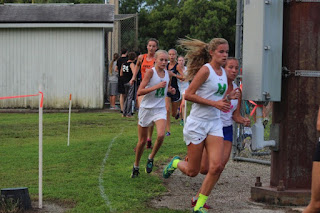 Finally, there's the what should have been stories of both Fort Myers boys and girls cross country team.  This is not meant as a slam at any individual or either coach, but neither team fulfilled their potential and I think everyone would agree.

The Fort Myers boys caught a bad break when niggling injuries swept through their top three at various times during the season.  A nasty illness that staggered senior Sam Hordinski, was the final blow.  Yet in the end, finishing 5th at the State Champions is actually quite an achievement.

Then there's the mystifying crew of girls that run for Rob Strong.  Getting 3rd is nothing to feel ashamed of.  Fiona Kurland could be next year's Kayla Easterly.  But as a fan of this team and these young women, something was missing.  Each of the top ten girls on this squad had their moments during the course of the season.  But the stars seemed misaligned because they could never hit their peaks together on the same day.  Had they done, a spot on the podium was theirs.

I'm crossing my fingers that the outdoor track season could be a special one for these special distance runners from across Lee County.  If the weather cooperates, we could see some staggeringly good times.  Here's to a great winter of training and a sensational spring.
Posted by Rink's Ramblings at 7:26 PM No comments: