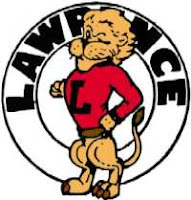 One of my favorite distance runners in the history of Lawrence High school ran his last race over the weekend at the Kansas State High School Championships.  Roy Wedge ran a big PR in placing 2nd in the 3200 run and ran a stellar second leg to help his team to a 4th place finish in the 4 x 800 relay.  The talented Mr. Wedge can also lay claim to an individual title in cross country last fall.  But more importantly he led the Lions to their first two team titles in 2008 and 2009.

This got me to thinking about the all time great distance runners at LHS.  The pantheon of great high school running programs is limited.  When I say great, I'm talking dominating.  Shawnee Mission Northwest, Shawnee Mission South and Wichita East would have to rank as the top three.  Year in and year out Northwest produces quality runners, both boys and girls.  South became a dominant school in the late 60's but by the 1980's it's hit and miss.  The same can be said about Wichita East but when one looks at the all time list of fastest times ever in Kansas, Jim Ryun aside, and Wichita East deserves its place among the very best.

Lawrence High has had its fair share of great distance runners.  As good as Roy Wedge was, he wouldn't even rank in the top three, but he would rank in my book as the school's 5th best ever distance runner.  Here's the rest of my list, which takes into consideration post high school accomplishments:
4.  Chris Williams:  He captured a remarkable three straight gold medals in cross country at state.  He also snagged two 3200 meter titles in track and field.  Williams was a great competitor, nicknamed, "Animal," but he never ran the kind of times one would expect of a multiple state champion.  He went to Duke where he had a good, but not great career.
3.  Doug Peterson:  Doug holds the school record for the 880 and mile (800/1600).  He was a state champion in the mile and ran one of the best distance medley relay anchors at the K.U. Relays clocking a 4:12.5 in a desperate effort to get the Lions onto the awards stand.  Doug went on to become a Big 10 champion at Northwestern and an Olympic Trials qualifier for 1500 meters at Northwestern.
2.  David Johnston:  It's hard to argue with David's five state titles, one in cross country and four in track.  David was the most versatile distance runner at LHS, running quality times from 800 to 3200.  He enjoyed an outstanding career at Kansas earning All-American honors in cross country.
1.  Kent McDonald:  What's amazing about Kent's position on top is that he is the only runner NOT to have won a state title.  Kent had the misfortunte of racing against one of the greatest distance runners in Kansas high school history, Randy Smith.  Kent still holds the school record for two miles running one of the state's fastest times ever in 1971 when he clocked a 9:08.9 at the Shawnee Mission North Night Relays.  He also held the school record in the mile since broken by Peterson.  At Kansas McDonald won four Big 8 titles in the steeplechase, an event that he was an All-American in, set and still holds the school record for that event, qualified for the Olympic Trials and finished second at nationals in the steeple to the aforementioned Smith.
Posted by Rink's Ramblings at 7:07 AM