I was late to the game as a boy when it came to sports.  I really couldn't give a hoot about professional or college athletics.  That all began to change in the late summer of 1965 when I became aware of an awesome southpaw, Sandy Koufax.  I quickly became fixated on the Dodgers' World Series match with the Minnesota Twins.  Koufax winning game seven on two days rest really started to stir my passion for sports.  But it took a night in late February to really cement my love.

It was a Kansas basketball game.  My family had made the trip to Lawrence from Abilene as my oldest sister was to perform with a high school dance troupe at half time.  I watched the game on television from 9th Street and Wellington Drive in the home of Jack Mason, a family friend.  It was the first time I had ever watched the Jayhawks.  It was the first time I ever saw JoJo White.

The Jayhawks blew out Nebraska that night 110 to 73 and I was hooked. Walt Wesley and JoJo White were my newest heroes. I cried when Kansas lost in double overtime to Texas Western (UTEP) due to an officials call that JoJo had stepped on the boundary on a game winning shot. 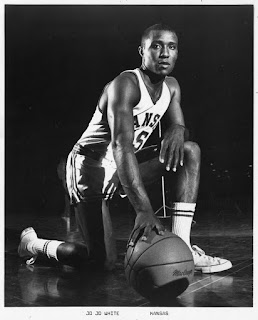 I begged my mother for a chance to see Kansas play in person.  I finally saw JoJo and the Jayhawks at Allen Field House in January 1968 against Iowa State.  It was an overwhelming experience.  I sat high up in the massive structure, the players looked like ants scrambling around on the raised court.  I remember watching JoJo take his familiar off center stance at the free throw line.  I remember the public address announcer telling the fans of Phog Allen's presence at the game.  It was about then I discovered that the legendary coach lived across the street from my grandmother, but that's another story.

JoJo was why I was at that game.  I remember how disheartened I was when the team was bounced by Dayton at the then prestigious NIT tournament that year.  And then how when JoJo had used up his eligibility, Kansas couldn't even make it out of the first round of the NIT.  White left Kansas twice being named an All American twice and with a gold medal from the 1968 Olympics.

White went on to enjoy a great career with the Boston Celtics where he helped win two NBA titles.  With his passing Tuesday night most of the obituaries and tributes centered on his place in basketball history and his run with Boston.

I'm here to state without question that JoJo White is the best point guard in Kansas history.  He played for a very good coach, Ted Owens, who ruined more guards than any coach in NCAA history.  Owens believed in feeding the big men and was quick to sit guards who missed open jump shots.  White could have averaged at least five points a game more if Owens had been more lax.

White could defend, almost as well as one of the other great guard's during Ted's tenure, Darnell Valentine.  The only other point guard that belongs in the conversation of these two is Jacque Vaughn.  He was a great distributor of the ball and he could score.  Jacque lacked the defensive chops of the other two.  Others might argue that Kirk Hinrich, Sherron Collins or Frank Mason should rate as number one.  White was the best ever.  He succeeded in an offense that wasn't suited to his skills.  He was a tremendous player in the NBA, something the other five guards we've mentioned can't claim.  And finally, he was a two-time All American, something that none of the others can claim.
Posted by Rink's Ramblings at 7:11 PM No comments:

Ray Thomas is dead.  Those of my age will remember him as the flute player from The Moody Blues.  He was 76.  Why write about him?  Because I'm angry that he won't be part of the Moodies long overdue induction into the Rock and Roll Hall of Fame. 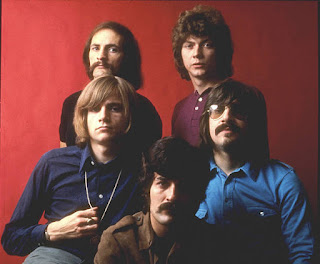 The Moody Blues were as big a band as any for a six year run from 1967 with the release of the ground breaking "Days of Futures Past" until the band's "Seventh Sojourn" in 1973.  Thomas only stood behind Jethro Tull's, Ian Anderson, as rock's great flute player.  Go listen to "Legend of a Mind" or his playing on the timeless "Nights in White Satin" and you'll hear some great progressive rock and roll.  They filled a place in British rock just a step behind The Beatles, The Rolling Stones, The Kinks and The Who.  The band sold out arenas.

For whatever reason, the mastermind of the Rock and Roll Hall of Fame, Jan Wenner, hated The Moody Blues and kept them out of the hall for more than 20 years.  A lot of critics found the music created by The Moody Blues just to slick and pretentious.  But beneath the sheen of what was hated were some great songs, most of them penned by Justin Hayward, a couple of nuggets by the late Ray Thomas.

I had the great fortune of meeting Ray Thomas, Justin Hayward, John Lodge and Graeme Edge some 14 years ago when they opened one of their tours in Fort Myers.  It was one of the last tours Thomas was to make with the band as his health began to go into decline.  Ironically, the Moodies will be playing in Fort Myers this month.  I have seen the band more than a half dozen times.  As much as I want to go see them one final time, I won't ante up the money to see them in Germain Arena, where the acoustics are simply awful.

I was looking forward to seeing them, together, with Ray Thomas and hopefully with original keyboard man Mike Pinder, at their induction into the Rock and Roll Hall of Fame.  Now that won't happen and that makes me very sad.  Ray deserved better and so did his band mates.
Posted by Rink's Ramblings at 4:46 PM No comments: