I was waiting for this weekend to write a wrap up of the amazing season of high school track and field that graced Southwest Florida.  A trio of middle distance runners ran some pretty spectacular times.  The final competition was Sunday in North Carolina where Estero senior to be Hugh Brittenham ran a disappointing 2:01.86 to wrap up a spectacular season.

My guess is that a couple of factors led to his slowest 800 of the season.  He's been competing at a high level since February.  Hugh did a lot of traveling in the last month snagging two big wins in The Bahamas before a respectable showing last weekend in Seattle against the best group of 800 meter runners in the nation.  I think the east/west/north trifecta of travel plus the cold nasty conditions of the Pacific Northwest took a toll on Brittenham.  A senior season awaits with a goal of break 1:50 and I'm betting his eyes squarely on a sub 4:05 1600 plus another state title or two.

The fireworks on the girl's side came from a couple of freshman who dueled for the Class 1A tate championships over 800 meters.  Jessica Edwards from Cantebury bested former state champ Sierra Oliveira of Evangelical Christian.  Edwards clocked 2:13.33 to Oliveira's 2:13.96.  Edwards also grabbed 2nd in the 1600.  The two girl's appear to have the gifts to break 2:10.  I like Edwards in the long run because of her coaching.  Plus Edwards runs cross country which only adds to her strength. 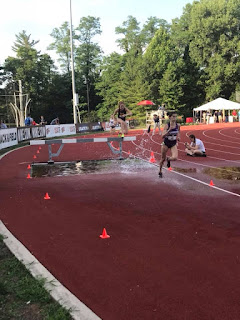 While she's a year out of high school the spectre of Krissy Gear still looms large.  She followed up her three state championships from last spring with a trip to the NCAA track and field championships this spring in the steeplechase.  Eugene proved disappointing as Gear failed to advance out of the prelims.

She more than made it up a week later at the USATF junior nationals.  Gear captured gold in the steeple claiming a spot on the U.S. national team that will compete at the World junior championships this July in Finland.

Making the podium in Finland will be a tall order.  She will be competing against East Africans of questionable age and will certainly have to run considerably faster than her personal best of 9:52, which is a great time for a college freshman.

A national team is a great accomplishment for Gear and it should help build her confidence as she approaches her second year at Furman.  She's certainly help set the stage for focusing attention on the hotbed of high school distance running that you can now find in Southwest Florida.
Posted by Rink's Ramblings at 11:25 AM 3 comments: