I've railed before against what I call corporate running.  Mostly I hate the Color Runs, Tough Mudders, and Spartan Runs, but now you can add the Rock N' Roll Marathon folks to my list.  You see, the greedy bastards who run the series decided to say screw the professional athlete.  Oh, they'll comp their entry and pay out some prize money, but plane tickets and appearance fees, forget about it.

Many of you may say, tough, who cares.  But for every Galen Rupp that has a fat contract from NIKE, there are 100 Will Leers just scraping by.  Most professional runners have to work real jobs in between the training.  The a-holes at Competitor Group which runs the Rock N' Roll series among other races decided they needed to fatten their bottom line.

So excuse me if I won't donate to your charity fundraising run that's put on one of these corporate smucks.  I'm not going to give my hard earned cash to a bunch of corporate suits who are skimming a big chunk of your entry fee money for themselves.  All I can say is, support your local running clubs.
Posted by Rink's Ramblings at 6:14 PM 1 comment: 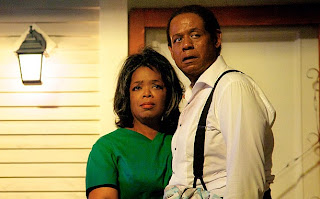 The Czarina and I took in "The Butler" Sunday afternoon.  I had heard good things, it's well worth the price of admission.  As I watched the story unfold it only drove home just how far we have to go as a nation when it comes to race.

As I posted recently, I deal with subtle and not so subtle forms of racism on a near daily basis.  Most of it comes in the form of emails, from ill-informed people, who don't understand why African Americans have such a big chip on their shoulders.  Many of these people believe that the media deliberately under reports stories that involve Black on White crime.  The killing of the World Two vet and the ballplayer from Australia are their latest launching pad.

But I even get emails about a murder case that happened more than six years ago in which three black men killed a young white couple.  The idiots who send it in that it's a story that just happened.  I would like to know the bigots who are behind the cottage industry responsible for disseminating this garbage.

I wish there was a way to force these morons that send their race baiting garbage into the station to watch "The Butler."  I think they would need to see it a half dozen times or more before they'd begin to realize that we're not that far removed from a time when Whites could beat and kill Blacks with impunity.  By the way it's a great movie with a really interesting cast.  I even liked Oprah.  Forrest Whitaker has come a long way since "Fast Times at Ridgemont High."
Posted by Rink's Ramblings at 5:37 PM No comments: 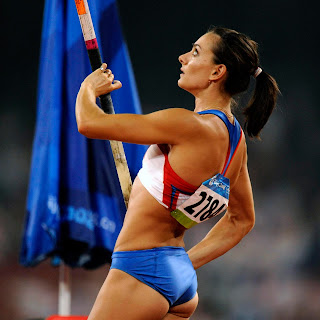 Undoubtedly, the star so far of this Track and Field World Championships in Moscow is Russian pole vaulter Yelena Isinbayeva, that is, until she opened her big mouth.  The world record setting Isi grabbed her third world championship gold medal on Wednesday.  Then she decided to take time to criticize her fellow competitors for showing support for the gay and lesbian community.

For those of you asleep at the switch, Russia recently passed some pretty stringent laws, aimed at gays and lesbians.  I have personally experienced the paranoia over homosexuality in Russia.  I was interviewed four years ago in St. Petersburg for a television program hosted by Vladimir Posner, yes, that Vladimir Posner, for an American's view on the issue.  Russians honestly believes that gay people are out to recruit children into their lifestyle.  It's a freakish kind of paranoia.

My take during the interview is that people fear what they don't understand.  I explained how my views have changed 180 degrees in the last 30 years and that the same thing is slowly happening in America.  We all know someone who is gay.  We all work with people who are gay and if you don't think you do it's only because the folks you're working with who are gay don't advertise it.

Isinbayeva is retiring after this competition.  It's a good thing because it's a safe bet that her major sponsors, namely Adidas, will probably walk away from this attractive track and field superstar.  I imagine if she planned to have any future in the IOC or IAAF, the ruling bodies for the Olympics and track and field, that bridge has been burned.  It was refreshing to listen to the BBC commentators at the event thoroughly rake Isi over the coals for her repugnant remarks.

The controversy wasn't enough to overshadow a great day of racing.  Jenny Simpson cemented her place as one of America's greatest distance runners by winning a silver medal in the 1500.  The Colorado grad ran a bold race from the front and forced Sweden's Abeba Agregawi to dig down deep for the victory.  The silver goes along with Simpson's Daegu gold won in 2011.

Nearly forgotten in 10th place was high school phenom Mary Cain.  The high school senior to be once again showed her lack of racing experience.  She allowed herself to get sucked into the slipstream of Simpson's tough early pace instead of racing off the back of the pack where she's enjoyed her best success.  The hard early pace left Cain without her patented kick.  She wouldn't have medaled had she run smarter but a top 5 finish was left on the track because of her poor tactics.

But in her defense, Cain ran to medal, she ran to win.  She simply lacked the stamina to handle the aggressive running.  In another year, an American record could well be within reach, unless Simpson gets there first.
Posted by Rink's Ramblings at 5:37 PM No comments:

As great as it was to see Rupp and Manzano claim silver medals in the 10000 and 1500 in London at the Olympics, Nick Symmond's silver medal at 800 at the World Championships in Moscow feels somewhat more satisfying.  Symmonds is to USA track and field what Jim Furyk is to professional golf, a grinder.  With his performance in Moscow, Symmonds stamped himself as one of America's greatest 800 meter runners ever.

Symmonds is a running everyman.  He went to a small college on Oregon where he somehow defied the odds to become a world class runner.  He fought the sport's archaic system on sponsorship for track and field athletes.  He even set an American record in the beer mile.

Symmonds had learned from past failures.  He always used a stunning kick to thrust himself into races, a tactic that he used to great effect to win national titles.  But his kick was never enough on the world stage because he would often dottle at the rear of the field too long to use it. 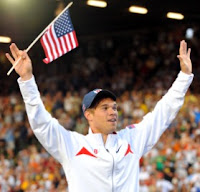 This race was different.  American Duane Solomon did his usual front running, but Symmonds, instead of falling to the rear as usual, sat in the middle of the field, slowly moving up on the home stretch of the first lap to latch onto the front.  From there he controlled the race roaring past Solomon with 200 meters to go, finding that extra gear with 100 to go, looking like the gold was his.  Unfortunately Ethiopia's Mohammed Aman came back from the dead and ran Symmonds down in the last 40 meters.  It didn't matter, because Symmonds had a medal that deep down inside he thought he could never win.

Unfortunately Solomon faded down the homestretch and finished out of the medals.  But it was a sweet day for U.S. track and field.  David Oliver took a much deserved gold medal in the hurdles and another long-time grinder, Ryan Wilson, grabbed the silver.  Only Jen Suhr fell short in the women's pole vault where the Russian crowd lifted her rival Yelena Isinbayeva to gold.

Now if Nick will just stay away from Paris Hilton.
Posted by Rink's Ramblings at 6:29 PM No comments:

The Czarina and I wanted to attend the World Track and Field Championships in Moscow, Russia in the worst way.  Going to a world championship is on my bucket list.  The trip would have given the Czarina to visit family.  Alas, the stars did not align and we settled for the U.S. Nationals in Des Moines.

Thank God for the BBC.  We awoke 6 a.m. Saturday morning to watch a bootleg feed of the BBC coverage of the women's marathon.  It was a death march.  It was simply unfair to start the race at 2 p.m.  The BBC commentators said it was done for Japanese television, where the race would appear in prime time.  It was horribly hot and humid.

Top Ethiopian and Kenyan marathoners used the conditions as an excuse to drop out and save themselves for lucrative fall marathons.  Kudos though to defending champ Edna Kiplagat who stayed just off the tough pace set by Italy's Valeria Starneo.  The Kenyan took a well deserved gold while the Italian happily settled for silver.  The Japanese got their prime time bronze from Kayoko Fukushi who never gave up after getting dropped from the lead pack.

The weather made for miserable running later on Saturday for the men's 10K.  American Galen Rupp didn't stand a chance.  He doesn't possess the crackling finish that he had a year ago.  Great Britain's Mo Farah does and that gave him gold while Rupp just missed the podium.

Flanaghan tried to front run her way to the podium but when it started to rain she seemed to wilt.  I don't know what's wrong with Hastings this year.  Her move to the east coast following last year's Olympics hasn't helped her.  Amy is not the same runner that she was a year ago. 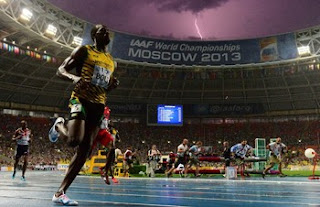 The highlight of Sunday was the precision performance put in by Usain Bolt.  He took the 100 meters under the stormy skies of Moscow.  Justin Gatlin gave him a race.  It's a shame Mike Rodgers couldn't run the finals like he did the semi's or the U.S.A. might have grabbed a bronze.

Another week of track and field lies ahead.  I'm looking forward to three super races.  The men's 800 could see the USA taking not one, but two medals.  Duane Solomon and Nick Symmonds are fit and ready for battle.  Then both the men's and women's 1500 should be special.

The women's rounds started on Sunday.  Prep phenom Mary Cain managed to advance thanks to her thunderous kick.  Jenny Simpson showed that she's ready to defend her title.  I may be a little distracted at work this week, trying to monitor the BBC while handling my other duties!
Posted by Rink's Ramblings at 3:10 PM No comments: