I watched tonight's Game 7 of the 2014 World Series with more than a passing interest.  You see, I was in the ballpark 29 years ago when the Kansas City Royals defeated the St. Louis Cardinals 11 to 0 to capture Game 7 of the 1985 World Series.  I was doing what I loved, covering sports.  I was working as a field producer for WDAF TV, the NBC station in Kansas City at the time and also the television home of the Royals.  I am and have been a huge Royals fan and attended the very first game ever played in KauFfman Stadium in 1973.

My life in broadcasting has allowed me to witness an incredible number of great sporting and news events.  Without a doubt, the 1985 World Series is at the top of that list.  I had the privilege of being in the locker room as Kansas City celebrated its first world championship.

I also had the indignity of being arrested while trying to work my way from behind home plate to the first base photo bay by an over zealous Kansas City police officer who didn't believe that my all access pass that was the size of an iPad gave me the right to go to my crew situated there.  Fortunately, Royals PR maven, Dean Vogelar, bailed me out of the dugout jail, where a rowdy bunch of drunks had been tossed for running out on the field.

It's funny as I reflect back because 1985 is the same year that I resurrected my life as a runner.  I had been semi-serious about my running as I approached age 30.  I had the good fortune that year to work as the assistant cross country coach at Rockhurst High School and the squad's two top runners, introduced me to a private coach who had a big an impact on my life as any individual outside of my mother.  Tom Dowling tapped into my potential and in one short year I dropped my marathon PR from 2:57:14 to 2:49:25.  It proved the importance of structure and guidance when it came to training.  Tom's direction paid dividends for the years to come.

As much as it hurts that my Royals came up short against the Giants, I'm happy that Tim Hudson's stint on the mound, wasn't the deciding factor.  Besides his wife's loyalty to Run Florida, Hudson has long been one of my favorite baseball players.  He's always someone I wanted on my fantasy baseball team's and in fact was on my team this year, again.  Congratulations to the Giants and to Tim Hudson on finally getting a well earned ring.
Posted by Rink's Ramblings at 8:21 PM No comments:

Fear and Loathing in Las Vegas

I haven't gone on a wild, drug and alcohol fueled adventure in Las Vegas.  I am spending four days in quite possibly the worst city to try and get a good run in.  If you're staying on the strip, all that lays before you and your feet are concrete.  It is the worst surface imaginable to run on.  Plus in Vegas, there's navigating the pedestrians and the various crazed taxi drivers.

The point of this blog is to talk about concrete and avoiding it at all costs.  Asphalt is much easier on your joints than concrete.  In fact, Arthur Lydiard, the late great New Zealand coach, who invented the concept of long, slow distance, preferred that his athletes train on asphalt over grass or dirt trails.  Now that one may leave you scratching your head.  Here's Lydiard's reasoning, footing.

Lydiard wanted his runners on a smooth, reliable surface, especially if they were doing a tempo run.
Grass or dirt trails rarely offer reliable footing, unless you're running on a golf course.  Think about all of the crazy angles your feet end up at when running on a trail or on a cross country course.  It's hard on your muscles, tendons and joints.  Unless you train regularly on trails, running them on a whim will provide your body with a shock.

As for Las Vegas, I always head south off the strip and into the neighborhoods.  There are less people to deal with and a lot less traffic.  I actually found the University of Nevada Las Vegas track on my five mile run today and may make the 2 mile trek to it for a softer, safer, monotonous run on the tartan there.
Posted by Rink's Ramblings at 8:13 PM 1 comment:

As For These Shoes... 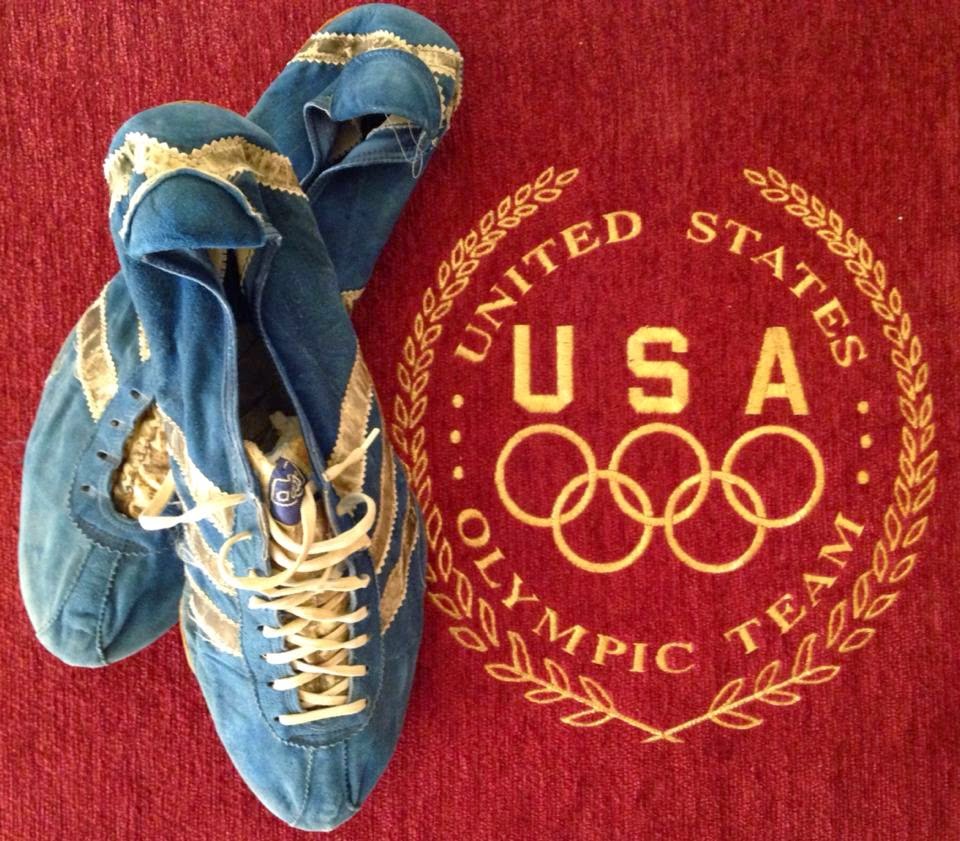 Forgive me my obsession about running shoes, but I saw these on Facebook Tuesday and I felt it important to tell the story behind these battered Adidas. These shoes carried an American to Olympic glory 50 years ago.

On October 14, 1964 in Tokyo, Japan, Billy Mills became the first and only American to win the Olympic gold medal at 10,000 meters.  Mills lived in my hometown of Lawrence, Kansas where he went to an Indian only high school called Haskell, after leaving his home on the Sioux reservation in South Dakota.  Haskell is now a four year college and is still a school for Native Americans.

Mills went to the University of Kansas where he enjoyed a great deal of success, but nothing that would foretell the Olympic gold that would come his way after he graduated college and joined the U.S. Marines.  Mills wasn't even considered the top American contenders at 10,000 meters in 1964.  A rambunctious high school boy from Spokane, Washington, Gerry Lindgren, despite his youth, was considered a medal contender.

Lindgren sprained his ankle a short time before the Olympic final.  Mills wasn't on anyones radar.  He was so poorly thought of when he went to the Adidas representative to get some shoes they turned him down.  Mills headed to the Puma representative who immediately agreed to give him shoes.

Back in 1964, when it came to running shoes, top track and field athletes had two choices, Adidas and Puma.  The German shoe companies were owned by brothers who hated each other and were equally bitter rivals when it came to snagging athletes to run in their shoes.  Asics, New Balance, Brooks, Mizuno and Saucony simply weren't players at the time and NIKE didn't even exist.

When Adidas got wind that Mills would be wearing Puma they relented and gave him a pair of their shoes which he wore to victory.  During the medal ceremony Mills wore a pair of Puma's to acknowledge their help in getting him the shoes that he really wanted.

Those blue shoes bring back a lot of memories.  I owned a pair of blue Adidas Tokyo's through high school that looked a lot like those famous spikes of Billy Mills.  They were my favorite spikes to wear in cross country.  I wish I still had them.

I've been lucky enough to meet Billy Mills on a couple of occasions.  He's truly an inspiration.  Go to YouTube and watch his 10,000.  I dare you not to get goosebumps.
Posted by Rink's Ramblings at 6:47 PM No comments:

What's In A Shoe?

A shoe can break or make a runner.  I found it out the hard way 24 years ago while training for a particularly hilly marathon.  I developed a nasty case of achilles tendonitis.  I tried a cortisone shot and within two weeks the searing pain was back.  It was then that I figured out the new Nike Skylon's were the cause.

When I moved to Fort Myers in 2003, I immediately saw a return of plantar fasciatas which had bothered me about six years before when I was still running 50 plus miles a week.  That's when I found Mike Pemberton and thus a shoe love affair was born.  Mike put me in Mizuno's and boom, the plantar disappeared just like that. 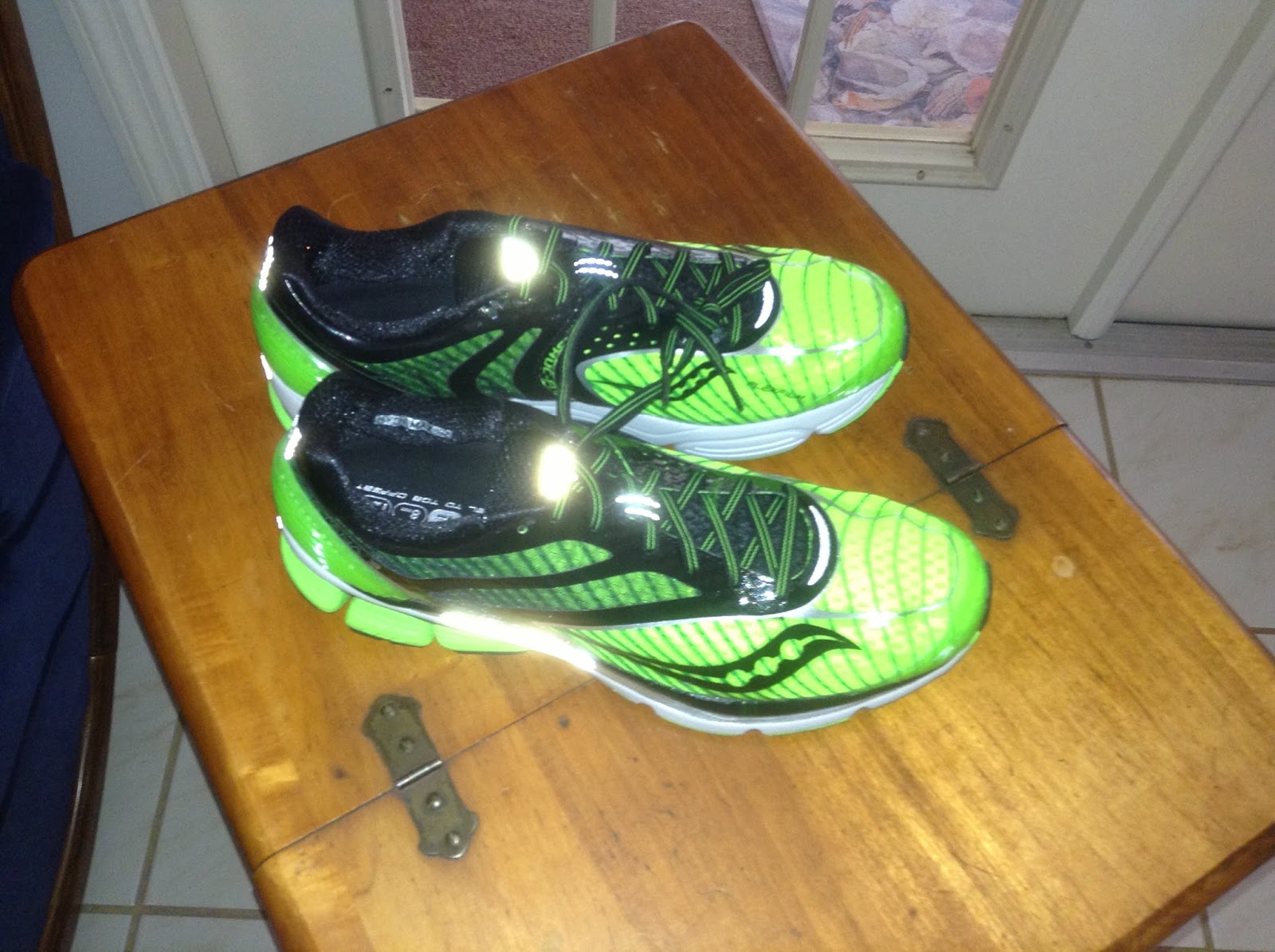 That started a running conversation (excuse the pun) with Mike about running shoes and what different shoes do, both good and bad.  It took Mike more than three years to get me to run in Newtons.  That was a real change for this avowed hell striker.  But that move led me back to lighter trainers and an ongoing affinity for the Saucony Kinvara.

But enough about me, I want to write about what Mike and I see on a weekly basis from runner's, both experienced and inexperienced.  They walk into the store with a beloved shoe that look like it's been beaten to death, the runner  oftencomplaining about injuries.  Most of the time the problem is they have run in the same shoe for a year or even longer.  If you're running in the same shoe three to four times a week, you're going to get six months out of them at best.

The other mistake is the everyday runner, using the same shoe day in and day out.  They come in two or three months later wondering what's wrong with the shoe.  What they don't understand is they've put six plus months use of shoes into one pair.

Shoes need time to recover.  The EVA that the shoes are built on compress and a 24 hour break allows that EVA to return to its original shape.  The other thing about EVA is that it deteroiates over time.  It has about a one year life span and then it begins to lose all of its cushioning properties.  That's why it's a bad idea to hit the cut out tables at the big box stores because shoes many times are DOA.

What I'm getting to is that if you are running five times a week or more, you really need to run in two pairs of shoes.  I've been doing it since the late 70's.  I usually rotate between three shoes, the Kinvara, my Newton Kismets and the HOKA Clifton as a recovery shoe.  That's not unusual for a dedicated runner.  I know some runners that use three to four shoes, not to mention their racing flats.

The point is, different shoes do different things.  They work different muscle groups.  In fact, as I prepare to start increasing my long runs I'm going to have to think about investigating into a heavier training shoe that can withstand a 10 mile plus run.

The shoes are an investment in myself.  Two pairs of running shoes will help stretch the life of both pair.  In the long run (excuse the pun), you'll get more miles for your buck if you double down on your purchases.
Posted by Rink's Ramblings at 5:15 PM No comments: