I Don't Know What to Think

I have usually spelled out my feelings about the latest edition of Kansas Jayhawk basketball well before Thanksgiving.  But ESPN's shakedown for viewers with ESPN+ has limited my viewing of K.U. thus keeping me from making any real assessment about this team.  Now I can share a few thoughts.

Kansas will be a formidable team as long as Doke Azubuike is healthy.  Doke is a double/double on paper every night.  Kansas is as deep in the interior as it has been since the Final 4 championship team of 2008, so deep in fact Bill Self opted to redshirt seasoned veteran Mitch Lightfoot.  Besides Azubuike, David McCormack is a load.  He has a soft jumper that's money from 15 feet in and all that's needed is for Silvio De Sousa to blow off the rust that accumulated from last year's suspension. 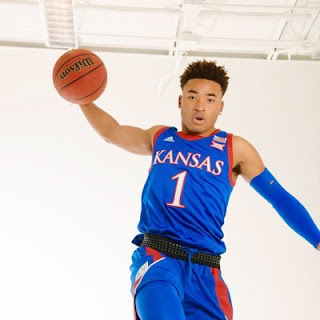 The back court is a three headed threat of Devon Dotson, Ochai Agbaji and Marcus Garrett.  This will probably be Dotson's last year at Kansas.  He quite simply could be the best guard to have ever played at Kansas.  His speed, his ability to finish, his outside shot and his defense is all top notch.  He's every bit the player of Sherron Collins and Frank Mason.  He's as complete as JoJo White.

Ochai Agbaji runs hot and cold.  He is incredibly athletic and plays hard on the defensive end.  Kansas is unbeatable when Agbaji plays well.

Marcus Garrett is the lock down defender.  He can cover four spots on the floor.  He's more than adequate ball handler now and is fearless driving to the hoop.  If he had an outside shot he would be going to the NBA.

If transfer Isaiah Moss had played for Kansas last year the Jayhawks would have won their 15th straight conference title.  He was the extra outside shooter that the Jayhawks desperately needed to help spread the floor.  I have a feeling he will be streaky but he's a weapon that the Kansas offense sorely needs.

The two freshman, Tristan Enaruna and Christian Braun won't see much in the way of minutes by the time this team hits conference play.  Both players can shoot from the outside and Enaruna shows signs of being a first rate defender.  The great unknown among the freshman is forward Jalen Wilson.  Once he comes back from injury in January it will be interesting to see how he fits into the rotation but if the reports are true about his ability in early season practices, he will be a contributor.

That brings us back to the bigs.  Bill Self desperately wants to play the hi-low with Doke, Silvio and McCormack.  The trio has struggled when they've shared the floor.  I think Self will continue to experiment through the pre-season but will ultimately go with just one big once conference play hits.

I don't know how Self keeps reloading.  He doesn't get all the top recruits but he does an amazing job of recruiting kids that fit together.  His athletes buy into the system and appear to believe in the approach to hard nose defense and an offense that demands the ball go into the interior.

Is this is Final 4 team.  Yes.  Will they make it to the first weekend in April, the odds say no.
Posted by Rink's Ramblings at 8:18 PM No comments:

The Slow Death of Track and Field

Track and field has been dying a slow death for the last 40 years.  As shamerturism gave way to professional track and the spike of performance enhancing drugs, the public seemed to lose interest in the sport.  So the latest fix by the sports ruling body seems appear foolish and wrong headed.

The IAAF rebranded itself World Athletics today.  Just yesterday they decided to ax two field events, the discus and triple jump, plus two running events, the 200 and steeplechase from the Diamond League.  It is beyond head scratching.  Consider this, without the 200 meter dash, we may never have seen the likes of Usain Bolt.  That's right, no Bolt.

The Jamaican sprint made his name as a 200 meter runner.  The first time I became aware of him was when he started running stupendous times as a 17-year-old in the 200.  His fame as the world's fastest human wouldn't come for another five years.

Without the steeplechase we wouldn't have had the incredible 2017 magic of Emma Coburn and Courtney Frerichs turning the world on its head with their dramatic one-two finish at World Championships.  The steeplechase was where the great Jenny Simpson first made her name before turning to the 1,500.  It is one of the most entertaining track races alone simply because of the hazards of the water jump.

World Athletics banished the 5,000 meter this past Diamond League season and 10,000 meter races have gone almost extinct at major track meets around the world.  World Athletics says it is taking its lead from social media.  So let me get this straight, a handful of idiots on Twitter are determining what events are worth watching at major track meets.  Think about this, only 22 percent of Americans even use Twitter and that number mirrors use of the social media platform around the world.

Two of my greatest track and field memories are watching discus thrower Mac Wilkins blasting massive throws at Hayward Field forcing officials to add extra turf to the end of the throwing zone to handle his efforts.  The other was watching Willie Banks imploring the crowd to join him in clapping him down the runway to a massive triple jump.  The athletes need to band together and put a stop to this nonsense.  They have the power if they work together, otherwise their event may be next.

Track and field is at death's door and only its athletes can save it.

Posted by Rink's Ramblings at 11:21 AM No comments: