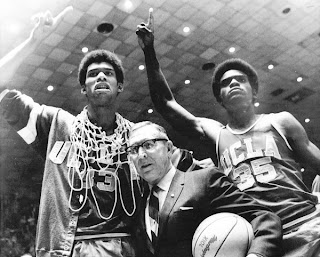 As a young boy growing up in north central Kansas my love of sports really blossomed in the fall of 1965.  It was a grand awakening to heroes like Sandy Koufax, Jim Ryun, and Wilt Chamberlain.  My wonderful mother fed my passion with a subscription to Sports Illustrated and I was hooked.

As much as I loved the Kansas Jayhawks I became a huge fan of UCLA basketball.  I was enthralled by their style of play and the fact that they won with all different types of teams.  The Bruins dominated college basketball for a decade in a manner we will never see again.  It was due in large part to their coach, John Wooden.  In my opinion, he is the best coach, for any sport, period.

Granted, Wooden was blessed to have two of the greatest centers in college history, Kareem Abdul-Jabbar and Bill Walton, but he also won with the likes of Sidney Wicks, Richard Washington, and Gail Goodrich.  His teams were cool and unflappable just like their coach.  Their full court press was fearsome.

My love for UCLA came at a time when college basketball was a rarity on television.  Seeing the Bruins on TV in the late 60's and early 70's was a real treat.  John Wooden embodied the best that sports had to offer and I rejoice in the passion for excellence in sports that he helped spark in this boy from Kansas.
Posted by Rink's Ramblings at 6:37 PM