I thought it best to fire up the way back machine again and renew my series of blogs about my adventures in my chosen profession, television news.  The winter and spring of 1978 introduced me to the world of working in a newsroom.  I worked as an intern at KMBC along with another KU student Gene Slais. 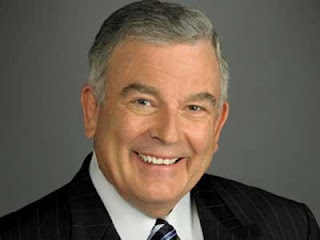 The newsroom was a page of script taken straight from Ron Burgundy.  Larry Moore was THE anchorman.  More than 30 years later Larry is still anchoring at KMBC after a couple of ill-fated detours to San Francisco and Chicago.  Larry was full of fun.  He would grumble at me, "Rinkenbaugh, working with you is like trying to make journalistic timber out of a twig.  I would cry when he announced later that summer that he was leaving Channel 9 for San Francisco, the "Big Time" as he called it.

The weather woman was Cheryl Jones.  She was a short firecracker from Tennessee with massive breasts.  Cheryl would sometimes come to work not wearing a bra.  Her globes would hang there in all there glory driving this 22-year-old to distraction.

Don Fortune anchored sports, right down to the tacky plaid jackets.  He was capable of incredible outbursts of anger, generally aimed at 10 p.m. producer Jerry "Pittsburgh" Plantz.  The fights were spectacular and it was from Jerry that I learned that once it was over, never let the anger carry over to the next day.

The other great teachers that I had in that newsroom were assignment editor Jim Overbay and producer Gerry Roberts.  Jim went on to be a successful news director at KCTV and Gerry is the assistant news director at KMBC.  Whereas Plantz could be volatle, Roberts and Overbay were cool, calm and collected.

Ridge Shannon was the news director.  He was in a tough situation.  Ridge ran the #1 news operation in town but the owners MetroMedia were constantly cutting his budget.  He was at the center of the biggest anchor sexism scandal in American television history involving Christine Craft, but that's a whole different blog.  Ridge and I became good friends years later, even traveling to races together and sharing a meal or two in Southwest Florida.

My favorite in the newsroom though was the weekend anchor, Corrice Collins.  Corrice was a bigger than life, man.  Corrice and I would take great delight at sitting at one of our favorite Westport watering holes and insulting each other with racist jabs.  Mr. Collins happened to be black right down to his massive afro.  Corrice taught me a lot by just letting me go out on stories and watch him operate.

Ridge ended up hiring me as a part time associate producer.  I wrote stories, shot silent film (you had to be in the union to shoot sound), made graphics, and learned how to run the chyron, my favorite job in the newsroom.  That experience would lead me to bigger and better things.  But more on that later.
Posted by Rink's Ramblings at 8:46 PM