I ran the Naples Daily News Half Marathon on Sunday.  In the weeks leading up to the race I fully expected to run under 1:50.  However, the best laid plans can be undone by the simplest of acts.  That act was pulling a shoe box out of a large box of shoes, spraining my back and leaving me unable to run for almost a week.  Now missing that amount of training just a couple of weeks before a race shouldn't have impacted my goal.

I simply failed at the first rule of racing, preparation.  I needed a couple of more long runs and several more tempo runs.  I could tell when I returned to running a few days before the race that I needed to lower my expectations.

Race day dawned muggy and in the back of my mind I knew that breaking 2 hours could prove challenging.  I needed water right from the get go and by mile 6 I simply let my mind drift and spent the next 6 miles checking out the shoes of my fellow competitors, most of whom were passing me.  I made a major mistake in not carrying a couple of GU's with me.  Part of me wants to think of myself as a 30 something runner who doesn't need to worry about replenishing dwindling fuel supplies in my body.

The Czarina, who had bravely run the same race the year before on no training, managed to cross the finish line in around 2:09:52, about 6 minutes faster than the year before.  She was happy and I was happy that we had both enjoyed one of the best half marathons in the country.  And then we waited, and waited and waited for an awards ceremony that was woefully behind schedule.

Turns out there was a time management problem.  Something happened to the timing system.  I didn't learn my official time until 48 hours later and I will never know my official split times or my "real time."  By "real time" I mean the time from when I crossed the start line mat to the finish mat.  It probably took me about 30 seconds based on my first and second mile splits.

A timing failure for a major race like the one in Naples is a black eye.  Having worked on numerous road races, including at the timing table in the days before chip timing was available, I can attest that the work and need for attention to detail is killer.  Money and age group awards are at stake a mistake can be a major embarrassment for the race and its sponsors.

It's a shame that it happened, but it should serve as a reminder for runners who have become accustomed to results being posted within minutes of the finish that a lot of behind the scenes work goes on to make that possible.  Sometimes people and their machines don't live up to our expectations.  In my book as long as there is a well marked course, plenty of water tables along with some food and fun at the finish line, than the race is a success.
Posted by Rink's Ramblings at 7:07 PM No comments:

Where Have I Been

It's a new year and I've gotten into a bad habit of not blogging enough.  Part of my reluctance stems from my ownership of the running store.  I feel pressure to stick to all things running, when in fact, I like to ramble on about other things like K.U. basketball and on rare occasions, politics.

I have been running consistently and doing a little bit of racing.  I raced a Thanksgiving Day 5K in 23:55 which felt okay and then ran a horrible 10K about 10 years later in 50:40, about 2 minutes slower than I expected.  Part of it was the weather, the other part was the fact that I have not done anything resembling speed work. 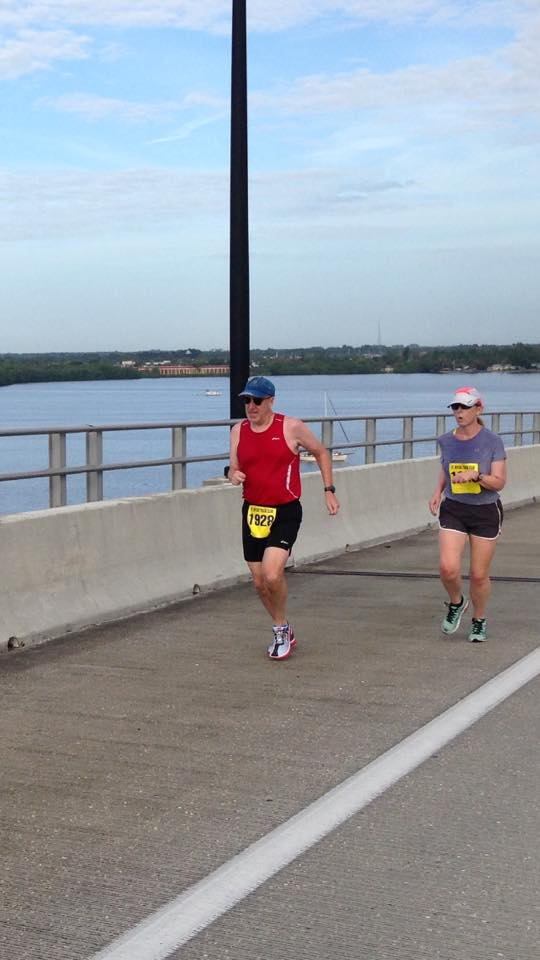 I started incorporating more tempo runs into my daily grind.  I think this was something that was sorely missing from the routine.  I like doing tempo runs on a track, but the local high schools are like prisons and it is nearly impossible to penetrate the facilities here.  A track, despite the monotony, is ideal because you know exactly where you're at in terms of distance and pace.

I'm lucky in that I have really good asphalt paths to run on adjacent to my neighborhood.  I take full advantage of them. One is even marked every half mile.  But I still miss doing work on the track.

I'm focused on the Naples Daily News Half Marathon which is 10 days away.  I first ran it in 2013  and missed it last year because of a leg injury.  I'm hoping to run about 5 minutes faster than I did the last time.  Anything under 1:50 would be good.  My fitness is much better despite the loss of speed.

I'll probably follow up the half with a few 5K's including one of my favorites, the Edison Festival of Light in late February.  It's probably the best road race in Fort Myers.  It starts downtown and follows the route of a parade that starts about an hour later at dusk.  The streets are lined with crowds and that certainly makes for an enjoyable time.

As I approach my 60th year, I'm not willing to concede that I can't run under 7 minute pace for a 5K.