Tonight marks the 50th anniversary of man's first steps upon the moon and it brings back some memories that I want to share.  Among them the customer who came into the store today and laughed about the anniversary and made it clear that the landings never happened.  I'm old enough to know it did.  I watched it on live television.  The science is out there to prove that it happened.  Scientists bounce lasers off reflectors left behind on the moon by two of NASA's lunar missions to measure the distance between the earth and the moon.

I was 12-years-old and living in Abilene, Kansas.  The family gathered around a black and white RCA television to watch the events of July 20, 1969 unfold on a Sunday.  The landing was exhilarating, the wait for the walk was agonizing.  It happened after dusk.  We diligently watched Walter Cronkite with Wally Schirra, one of the original Mercury 7 astronauts, walk us through the events as they unfolded. 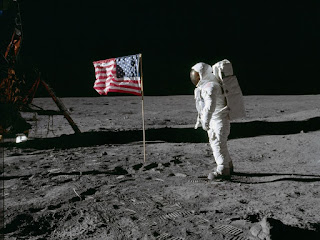 After that one small step I remember going outside and a neighbor, Greg Morgensen, hauling out his telescope and we gazed on the full moon in wonderment.  That night, those events, are a moment that one never forgets, like the assassinations of both Kennedys, or the night President Nixon resigned.  It will stay with me forever.

A family member played some role in the mission to the moon.  My Uncle Bob Walters, worked for the University Kansas in the space/technology building.  Uncle Bob said they were involved with the moon mission but would never discuss its details due to some supposed secrecy.  I wish in later years that I had talked to him about what exact role the university played before his passing.

The only other moon related experience that has stuck with me is when I had a chance to meet Neil Armstrong, the commander of Apollo 11 and the first man to step on the moon.  I had just moved to Phoenix, Arizona and was producing the 10 p.m. for the CBS station.  The company that owned us was throwing some sort of big party at the station.

The station was owned by Taft Broadcasting and by that time Neil Armstrong was on the board of directors for the company.  I am uncertain as to why the party was being held.  But I was there, in one of the station's massive, unused studios where all of the big wigs were drinking cocktails.

Armstrong was introduced to the gathering.  All that I remember is that I felt awe and was too shy to go up to him and speak to him.  I may have gotten to shake his hand.  I don't remember so I doubt that I did.  I'm fairly certain I had to leave in short order to get back to work, but I did see the man, flesh and bones, a true American hero.

I've thought a lot in this last week about the moon missions.  The program was heavily criticized because of its expense.  I think it's boneheaded to do so.  The science that came out of the moon program enhanced our lives.  The computers, the miniaturization, the jobs, it all made for a better America.
Posted by Rink's Ramblings at 7:15 PM No comments:

I took my time to ponder, consider and ruminate over the amazing season of track and field that was produced by the high school athletes who attend high schools across Lee County.  Anyone who reads this blog knows that I focus mainly on distance runners, but I must give a tip of the cap to the incredible senior season from Fort Myers High's Jacob Lemmon.

I have a soft spot in my heart for throwers.  My cousin Doug Knop was a multiple Big 8 champion in the discus and was an All-American at Kansas while being a long time school record holder.  Lemmon stepped his game up leading the nation for most of the season with a state record toss of 209 feet, six inches.  The Virginia bound thrower became a more than adequate shot putter this year and added a second gold medal at State in that event.

Then there were the sprinters from Dunbar.  Seneca Milledge will join Lemmon at Virginia.  Besides snagging 100 meter gold at State he and his Tiger teammates blazed a stunning 40.27 4 x 100 relay to take another gold in Jacksonville.  Milledge assets, his incredible physique, makes him susceptible to breaking down.  Otherwise I have little doubt he would have had a monster season in the long jump and been a force at 200 meters.  He is simply an amazing sprinter.

But I gravitate toward distance and middle distance runners.  Those of you who follow my blog know that I had great expectations for this outdoor season and I was waiting to write about it expecting some big results in June from the state's best middle distance runner.  Estero's Hugh Brittenham capped an outstanding high school career completing a difficult double at the Florida State Championships. Brittenham scored double gold running 4:14.73 and 1:52.4 in the 1,600 and 800.

We all expected Hugh to compete in the post season and make a run at a sub 1:50 800.  But I will praise Brittenham and his coach Brian Olitsky for deciding to end the season early, on a high note.  Last season Brittenham was running on fumes when he ran both the Brooks and New Balance post season meets.  Instead, he's spending the summer getting ready for cross country at the University of Florida.

The Oliveira twins didn't disappoint either.  Neither Sierra or Moriah captured individual gold but their efforts led Evangelical Christian to a team title at State and both ran on winning 4x800 and 4x1600 relay teams.  Sierra ran a PR at 800 meters in a superb 2:11.04 to finish second.  Moriah ran an astounding 53.70 to finish 2nd in the open 400. Both young women will be seniors next year.  We should see more fireworks.

The best single performance of the year belonged to double state champion Jessica Edwards of Cantebury.  She ran a monster PR to hold off Sierra Oliveira in winning the 800 clocking a national class time of 2:08.40.  Edwards also captured gold in the 1,600 running 5:06.78.  Edwards had a couple of tantalizing attempts at a sub 5 minute 1,600, a barrier that will most certainly be broken next year.

2020 promises to be wide open on the boys side of the distance scene while Edwards and Oliveira will duke it out over the middle distances.  Can either of these outstanding runners clock a 2:05?  I wouldn't be surprised if either or both did.
Posted by Rink's Ramblings at 10:36 AM No comments: