The summer of 1974 was a challenge. I wanted to be a walk on for the cross country team at Kansas. That meant getting in a summer of good training to rebuild the base I had lost from my various illnesses I suffered through my senior year of high school. But I also needed to work a summer job to earn enough money to go to college. I lacked the discipline to do both.

Work caused my running to suffer. Icouldn't make myself do the 50 to 60 miles a week to rebuild my strength. Instead I ended getting in at best 30 miles per week. My speed was good, my endurance was horrible. It became painfully clear during the first week of practice with the team at Kansas. It was one of those infamous journeys in the back of Coach Bob Timmons pick up truck out to some forlorn spot in the country. After getting dropped off we were to run the ten miles back to campus. 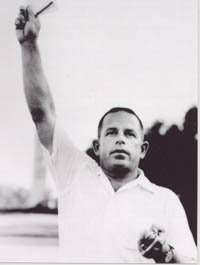 I should have gotten out of the truck at eight miles with an out of shape George Mason and a group of middle distance runners but I was determined to show Timmie I was made of sterner stuff. I was quickly dropped from the group and struggled all the way back into Lawrence. The workouts got more and more difficult. After two or three weeks I looked forward to Tuesday's and Wednesday's, the easy days of six to eight mile runs. I never ran in the morning which was supposed to be part of the equation. I simply didn't have the strength to run twice and day and go to school.

It was on a fateful Wednesday afternoon about six weeks into the season that I made the mistake of getting into the back of Timmie's pick up missing out on the last of a series of repeat two miles over the hills north of Lawrence. The following afternoon coach told me to come back when I was in shape. Now I had been warned by my teammates that such transgressions would raise Timmons' ire. But I had seen various teammates quit workouts over the previous two weeks with no consequences. Catching the blade came as a shock, especially given the fact that out of the 18 or so runners we had on the team, I had finished 10th in both time trials.

I kept running with Kent McDonald who was red shirting that fall. Kent had broken an arm over the summer and was trying to get back into shape. About a month into our training regiment I got a nasty case of strep throat and that was all she wrote. My grades were suffering and I simply didn't see the point.

By the beginning of the second semester at KU I had put in 20 pounds and couldn't have been happier. I continued to run at my leisure, two to four miles, three or four days a week. I even tried my first marathon that spring at the Kansas Relays. Running beside an old childhood friend Kirk Duncan, I made it through the first 18 miles at seven minute pace without a problem. But then I hit the wall and struggled back to the stadium to finish in 3:14:15.

Throughout college I ran the occasional road race now and then and even made it through another marathon my junior year hitting the finish line in 2:57:14. Not bad for 20 miles a week training. It even brought a smile to the man who had left me heart broken, Coach Bob Timmons. He had a team of runners at this particular race, each runners had already finished. But he was still standing there when I crossed the line. I could tell he was surprised to see me. Timmie smiled and gave me a well done. It's hard to describe what his simple acknowledgment meant to me. But it would be nearly a decade before I would run a faster marathon.
Posted by Rink's Ramblings at 7:50 AM