I cannot begin to explain how utterly sad I am right now. Iran found Roxana Saberi guilty of spying and sentenced her to eight years in prison. The United States gover 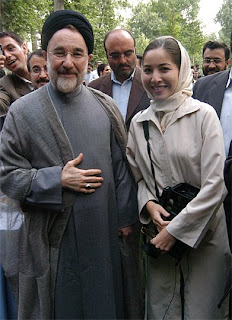 nment bares a lot of responsibility for this mess. Its hostile attitude toward the Iranian government for the last 30 years is behind this verdict. We supported a terrible tyrant in Saddam Hussein in his war against the Iranians. This foreign policy debacle began even before this with our support of a horrible dictator in Shah Mohamed Reza Pahlavi.

It was a different time in U.S. foreign policy when we openly supported dicators like the Shah, Hussein, Noreiga, and Duarte. During my four years at the University of Kansas I can remember the abject terror visited upon the Iranian students that were my classmates. They feared the Shah's secret police called Savak. I can remember a huge fight breaking out just outside one of my classes between two Savak agents and some Iranian students.

Then the buffoon who occupied the White House, Jimmy Carter, failed to realize the threat that the Ayatollah Khomeini posed to the Shah. Before he knew it the Shah was in exile and a bunch of religious nutjobs that hated the United States were controlling the country. Then the hostage crisis erupted and the rest is history.

We learned to forgive Vietnam and its people in less than a generation but we couldn't do the same with the Iranians. It's a shame. I see glimmers of hope. This week's news of the loosening of relations with Cuba, something that should have happened 10 years ago with the end of the Cold War.

But let's get back to the matter at hand. Say your prayers for Roxana. Pray that our government can find a fix for this horrendous mess and bring a good woman home to her family.
Posted by Rink's Ramblings at 8:21 AM