Fork in the Road Part 2

The CD/DVD arrived in the mail today so I thought I should give an update on my impressions. Normally my first thoughts of a new Neil disc are not very good and this is much the same. I hated Mirror Ball the first time I heard it but now it's one of my favorites.

A few of the ten songs stick out to me. Namely, "Just Singing a Song, "Jo 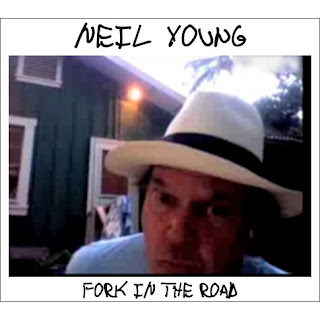 hnny Magic," "Cough Up the Bucks," and "Light a Candle." It's going to take a few more listens. The DVD is a must simply for the video of Neil singing "A Day in the Life" at a concert in Calgary last year. It's awesome!

I loved "Living with War." It was so raw and emotional and was a great snapshot of what Bush was putting the country through. Neil's attempted to take another snapshot with "Fork in the Road." Much like the photo on the album cover the shot is a little fuzzy and shaky, and that would match my first take on this CD. But what else would you expect from Neil. This country is a little fuzzy and shaky right now. It's not his worst by any means. I'm sure some of these songs will stick with me in ways that I haven't yet dreamt.
Posted by Rink's Ramblings at 4:13 PM