"But I feel nothing for their game where beauty goes unrecognized,
All I feel is heat and flame and all I see are dark eyes."
Bob Dylan

Roxana Saberi has gone on a hunger strike. Iran's crazy president is 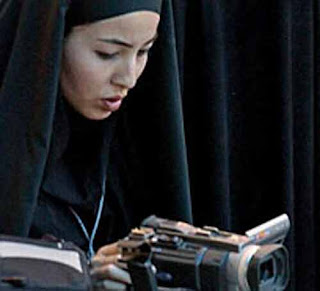 promising to keep her unscathed in prison. And I fear it will be several more weeks before this wonderful journalist will return to her prairie home in North Dakota.

I get the feeling now that the State Department is putting all of its muscle into resolving this delicate standoff. I'm hoping the guilty verdict against Saberi for spying is just a ploy by Iranians to work out an exchange for some of their people captured in Iraq by our military.

This brings me to the whole mess in the middle east and the prickly situation over torture. Torture is wrong. It goes against everything the United States of America stands for. A lot of people try and justify its use because of the heinous nature of the 9/11 attacks. It's hogwash. Lets look at the British. At the height of "The Blitz," their version of 9/11, Great Britain didn't torture the hundreds of German spies it captured during the war.

The soldiers of Abu Ghraib should have never been punished for their acts. Neither should the CIA operatives who engaged in the practice. The people who deserved to be punished are those that twisted our laws and ignored our treaty obligations to justify this inhuman treatment of prisoners. Let's start with Jay Bybee and John Yee and go all the way up to Rumsfeld, Cheney and Bush.

Unfortunately, President Obama is probably going to be forced into a corner by granting some pardons. Hopefully this chapter will help roll back the overreaching power grab of the executive branch orchestrated by Cheney. Congress needs to reassert its role as a co-equal branch of government.
Posted by Rink's Ramblings at 11:00 AM