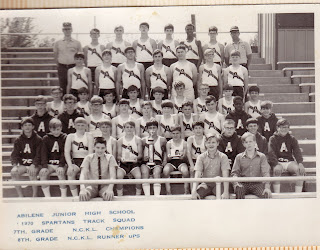 I started running 40 years ago. I was too skinny for football, not quite coordinated enough for basketball, but determined enough to try my hand at distance running. Growing up in the small town of Abilene, Kansas, I enjoyed a steady diet of the exploits of Jim Ryun. I can remember in particular watching a documentary on KAKE TV about Ryun, thus I was inspired to become a miler. I can remember running laps in a large field situated next to my elementary school. I would run eight to ten loops of the field figuring that was about a mile.

I didn't actually go out for track until my eighth grade year. The only problem was the longest distance was a 440. But I was not dissuaded. I would occasionally talk a teammate into a hard 880 and once ran a full mile against one of my friends. As I recall I clocked in at a shade over six minutes. It was a fun experience. I tried a little bit of everything that spring from hurdles to the pole vault. By the end of the season I was actually decent at running a quarter mile. I missed out on making the team for the last meet of the season by one spot.

The whole running thing didn't click until my neighbor, Greg Morgenson, talked to me about running cross coun 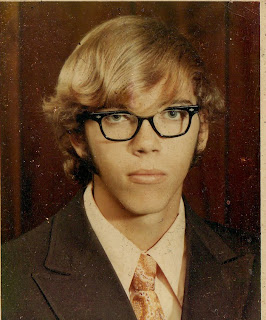 try. I think Greg, two years older than me, was hoping to snag a training partner, which he did. It wasn't much in the summer of 1970, mostly two and three mile runs. But we were consistent, running five days a week. Greg was a very good runner and showed nothing but patience and encouragement to me.
Greg Morgenson 1972

Greg with the help of a great coach, Bob Chatham, introduced me to a book, which helped me understand what I was getting into and why. It was called "The Long Green Line," written by greatest high school cross country coach ever, Joe Newton. The book laid out the hard work, the commitment to team, and the fun that running cross country could bring. Newton's team the York Dukes not only ranks tops in Illinois year in and year out but is considered a national power. Chatham used it as a basis to build a very successful cross country program at Abilene. My freshman year the Cowboys took third at state.

It was a difficult time, that freshman year at Abilene. My mother was in the process of getting a divorce and moving the family back to Lawrence. I actually made the varsity squad for the first meet of the season at Wamego. It was a huge invitational with nearly 100 runners at the starting line. It was a muddy day but I somehow survived and finished in the top 40, the top freshman in the race and was the sixth man on a seven man team that finished second that day.

Our next meet was a casualty of a freak September snow storm, global warming anyone? But that was that. I had decided to make the move to Lawrence. I could have stayed with my grandmother and finished the semester and been part of a great cross country team, but I had grown weary of living in a small town, where everybody knew everybody else's business.

I don't regret the decision to move. I went back to Wamego for the state meet that fall and watched my teammates win a trophy with pride and satisfaction knowing that in some small sense I had contributed to the team. Greg moved away to Lincoln, Nebraska the following year, where he became a state champion in the mile. He will always hold a special place in my heart for helping a young runner learn what it takes to strive for success.
Posted by Rink's Ramblings at 7:34 PM