The Czarina is on the road so I took advantage of my solitude to head out to a film that she would never see. "The Wrestler" has gotten so much buzz because of Mickey Rourke's acting. It's a fine art film. Rourke does a very good job. But it's not a great movie. He'll probably win the Oscar for Best Actor but I've seen better, more compelling performances this year. Clint Eastwood got screwed.

I'm not sure why I'm not ga-ga over this film. I've never been a big fan of Rourke. I can remember when he was going through his boxing phase and he blew into Kansas City for some bout. He ended up live on the station I worked at doing an on set interview with our sports anchor. I didn't even care enough to go down and meet him. I was ambivalent about the whole thing. Just the way I feel about this movie.

Don't get me wrong, I get a kick out of meeting celebrities. I can remember the first time I met George Brett face to face. He sat next to me on press row at a Big 8 post season tournament game drunk off his ass. It was K-State versus KU and Brett had the nerve to cheer for the Mildcats. He liked Ed Nealy, go figure. It cracks me up now every time I see Brett sitting in Allen Field House at a KU game. 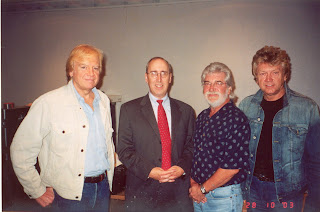 he Barbara B. Mann center. I've seen more than a half dozen times in concert and they've always been one of my favorite bands, right behind the Beatles when it comes to British groups.

Anyway, I met them before the sound check. They were very gracious and enjoyed chit-chatting about their new album, their love of their work and other mundane subjects. It was a big thrill. Much better than sitting through two hours of Mickey Rourke playing a washed up Hulk Hogan.
Posted by Rink's Ramblings at 7:25 PM