Earlier this week I read a post from one of the top high school coaches in Kansas on Dyestat, a wonderful website devoted to high school track and field. The coach asked about the days of yore when the Big 8 indoor was held in Kansas City. The meet, much like the old Big 8 Holiday basketball tournament, was an event. It was a crowded, rowdy, festive occasion in Kansas City's glorious art deco monument called Municipal Auditorium. Track and field was still popular when the meet was held in Kansas City and indoor meets thrived across the United States, from New York City to Los Angeles. But by the early 1980's indoor meets started disappearing faster than joints at a Grateful Dead concert.

I attended my first Big 8 indoor in 1972 thanks to Chris Bradt, a high school classmate and neighbor, tagging along with his wonderful parents. I had witnessed a couple of indoor track and field meets at Allen Field House before this. The field house was unique. It featured a dirt track, later replaced with tartan by 1973 or 74. The turns were tight and as you headed into them you came face to face with giant beams with supported the stands above. A well placed shove could send you hurtling into the unforgiving steel. It was pretty raucous with Pat Timmons, wife of long time KU track coach Bob Timmons, hooting from the stands, exhorting on the Jayhawks in their then famous powder blue and neon pink uniforms.

But I digress. I got to Municipal that night without a ticket and one of the enemy, a Kansas State Wildcat track athlete was scalping the precious ducats outside the building. Let's hope the NCAA isn't reading. As fate would have it the seats were right next to the parents of Jerome Howe, probably the best miler in K-State history. Howe captured the mile that night and sweatily placed himself on my lap so he could talk to his parents. The best part of the evening was the championship captured by my beloved Jayhawks. It was one of many more conference titles I would get to witness in the next few years.

The atmosphere at Municipal was electric. It was packed, frenetic, and full of great performances. Unfortunately the Big 8 decided that bigger would be better and moved the meet to Kemper Arena in the mid-70's. That experiment lasted about two years. Kemper has absolutely no charm. It's size swallowed up the crowds and the whole affair was out of place without any drawing power.

The Big 8 then moved the meet to Nebraska and the Devanney Center, a wonderful place. The track was fast and even though the seating was cramped there was plenty of excitement. I remember one particular epic battle between Cliff Wiley, probably the greatest sprinter in Kansas history and Oklahoma's William Snoddy, no slouch himself. The two were locked up in a scorching 300 and at the very end Wiley hurled himself across the finish line slamming onto the track breaking his wrist. I was standing there right at the finish and to this day I'm convinced that Wiley, who would later be ranked as the #1 400 meter runner in the world, won the race. The judges gave the race to Snoddy.

The meet moved to Oklahoma City for one year in 1979 and I just couldn't see making the drive. I didn't see another indoor meet until the 1992 edition at KU's Anschutz Pavalion. It's a horrible place. There's no seating, the lighting is drab, and even by 92 the track was already worn out at the then relatively new facility. Don't get me wrong, it was a great meet. Iowa State's Jon Brown, a runner who ended up becoming a world class marathoner, put on a dazzling show in the 3000 and 5000 meters. But there was very little buzz. 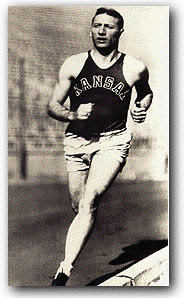 indoor meets still exist that I suspect still generate the buzz and excitement that the old Big 8 indoor generated. The Boston meet, the NCAA indoors and of course the Milrose Games in New York City. I want to make it to New York City someday and see the Milrose Games. I see it as the holy grail of indoor track and field in this country. Three generations of Jayhawks have competed in its historic Wanamaker Mile, Glenn Cunningham, Wes Santee and Jim Ryun. Maybe I'll get there in time to see a fourth generation Jayhawk add his name to this list of immortals.
Posted by Rink's Ramblings at 4:55 PM