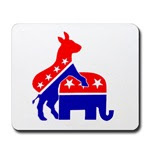 It's kind of like the look Sarah Palin got on her face when Katie Couric asked the Governor the trick question about what newspapers she read. My God that was underhanded! I mean, what in the hell happened to the Republican Party? I could swallow Newt Gingrich's contract with America in 1994 even with its full on embrace of the religious right. Balanced budgets, welfare reform, laws that apply to Americans apply to Congress as well, it made sense.

Growing up in Kansas voting Republican was a birth right. But the word conservative had a completely different meaning in 1964 with the ascendancy of Barry Goldwater than it does now. To me conservative meant fiscally responsible government. It meant less government not more. And above all government did not preach about issues of morality. Those issues were left to the Billy Grahams of the nation. I don't want to be in your bedroom, I don't care who you pray to and the way you feel about abortion is none of my business.

I voted Republican more often than not most of my life. I saw Democrats as corrupt, beholding to labor unions, and promoters of the welfare state. But 40 years after Goldwater my vision of what it meant to support Republicans completely changed. George W. Bush betrayed every principal that Barry Goldwater represented. Bush, Cheney, Wolfowitz, Yoo, the whole gang, are corrupt war criminals. Iraq, Katrina, and the current economic meltdown all occurred during W's watch. The blame lays squarely at the feet of the Bush White House.

This reformation of what it means to be a conservative really started with the emergence of Rush Limbaugh. I used to listen to Limbaugh and enjoy his snarky takes on feminists, Democrats and environmental wackos. By the end of the Clinton administration the rant started getting really old and by after 9/11 he simply ceased being funny. Now he's just a cranky old drug addict. The world isn't black and white as Limbaugh and his cabal of Ann Coulter and Michelle Malkin would have their followers believe. Limbaugh twisted the Reagan revolution into a simple mantra, wealth is good, taxes are bad, let the poor pull themselves up by their own bootstraps. If it were all that simple.

The "Rosemary's Baby" or offspring of this conservative line of thought was the emergence of Sarah Palin as John McCain's running mate. Palin is white trash run amuck. She is the product of the 700 Club, Bill Kristol and Walmart. In other words, she's an intellectually devoid bible beater whom upon intense scrutiny falls apart at the single tug of a thread. Palin blames everybody but herself for what happened in the presidential campaign. Her lack of introspection is astounding.

The election of a black man with a scant political resume shows you how destructive the Bush presidency has been. Something happened in my lifetime that I never believed could happen. A Black American is President. I'm not sure Barack Obama can fix the country. I don't know that anybody can fix the economic shitstorm that President Bush and yes, this Congress helped create.

Read Thomas Frank's book, "What's the Matter with Kansas." It zeroes in on the destruction of conservatism thanks in large part to the rise of the religious right. I'm not knocking religion or faith. It's important, it provides a foundation for people's lives. But it doesn't belong in politics or government. This country was founded on the belief of separation of church and state. I don't want to live in Iran because that's what we're asking for if we allow the Pat Robertson's and James Dobson's of the world to guide our government. So as the Republican Party gravitates toward "Bible Spice," aka Sarah Palin, let us pray our daily prayer that God helps Barack Obama lead us out of this mess.
Posted by Rink's Ramblings at 10:17 AM