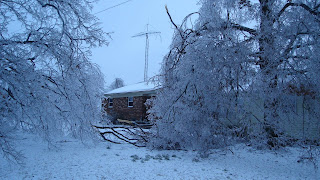 My poor friends in Western Kentucky are enduring the unthinkable. The winter storm that swept up through Arkansas across the Ohio Valley did a real number on parts of Kentucky and Tennessee. I believe this photo was taken by Lew Jetton just outside his home in Tennessee. Lew's reporting power could be out for weeks in some parts of the area.

I've been through a few ice storms. The first bad one I remember was in Kansas City in either 1986 or 87. The ice storm hit when the trees still had leaves so it really created a mess. The house I was living in didn't have power for a couple of days. What I remember most about that storm was all of the debris that was cleared throughout the city. The mulch was laid out on a runway at Richards-Gebaur air base in Belton, Missouri. The pile ran more than a thousand feet and was 20 to 30 feet high and about 60 feet across.

The worst storm was in 1994 in Paducah, Kentucky. That's the same area hit this week and not far from where Lew currently lives. The rain, ice mix started falling the evening of Sunday, January 16th. I ran 11 miles that day and remember the rain started to turn to ice. Before going to bed I had a conversation with Tom Butler, a grand gentleman who was my mentor at WPSD where I was news director. Tom was going to anchor that morning and wanted to know if I could drive him into work in the morning if there was a problem.

I went to bed just after 10 p.m. and it was snowing pretty good. I got the call from Tom sometime after 3 a.m. and told him no problem, I had front wheel drive. Well, the snow by then was up to the wheel wells of my car. Underneath the heavy snow was pure ice. I couldn't budge my Mazda and called Tom. He had a tow truck on the way to try and rescue his Cadillac, I got in my running clothes and headed to his house, a little more than a mile away. When I got there the situation was hopeless. There was no way his boat was going anywhere short of a helicopter airlift.

I decided to run into work and see if I could to prepare a newscast while Tom waited for the wrecker. The run was the most incredible of my life. It was just three more miles from Tom's house to work. It was eerily silent and beautiful beyond belief. The snow was up to my calf, fresh, soft, and very moist. Nary a vehicle had been down the road so I was alone in this winter wonderland. The trees, so weighed down from the ice and snow were bending over the narrow two lane street. Occasionally a branch would hit a power line and the pop and arcing blue flame would light up the night sky. This must have happened a half dozen times on the way into work. By the time I got up to the main highway about a half mile from work I realized that travel on this day was impossible.

I made it to the newsroom grateful to find that a director had spent the night at the station with his girl friend who also was the chyron operator. I called Lew, who was the morning weatherman to access his situation. He was stuck as well and a mile away from work. I told him to walk. He reluctantly agreed. It was about 5 a.m. and the news was starting at 6 a.m. There was no way to prepare anything that resembled a newscast and I was feeling more and more sure that Tom Butler would never arrive. The phones were starting to ring. Businesses, schools, people, wanting to know what the heck was going on. My two words of advice, stay home.

When 6 a.m. rolled around I took to the air wearing a sport coat over my Macy's marathon shirt. The shirt was particularly tasteful, bright red with gold lettering. We had a camera set up in the newsroom and I spent about five minutes showing the radar, reading off the closings and telling people not to venture out. I tossed it back to the "Early Today Show," praying that Lew would arrive soon. He walked in not more than a couple of minutes later. We went back on the air probably five minutes after that, Lew talking about the weather, while I answered phones and told folks about the closings and whatever other vital information I could lay my hands on. I think we managed to fill almost all the way to "The Today Show." Ironically it was the same morning as the Northridge earthquake in California so there was plenty of news.

It was a mess but we had all hands on deck that day and covered heck out of this major story. That night a national guardsman in a Humvee drove me home. It was the only way to get around. Tuesday, I managed to free my car and get into work. The main roads were fairly passable. I remember heading out for some lunch at a little seafood joint. I walked in and I realized that everyone was staring at me. I couldn't figure out what was wrong until one of the patrons spoke up and told me what a great job I had done the morning before. Two or three others joined in with compliments. I continued to get the, "Hey aren't you the guy who ran into work," comments for the next two months.
Posted by Rink's Ramblings at 9:21 AM