I'm crazy about Kansas basketball. The romance started in 1965 with the great Jayhawk team led by Walt Wesley but the love affair began in earnest four years later during the 8th grade at Abilene Junior High. I devoted an entire history class project to a team that went 17 and 9. I admired Jayhawks like Pierre Russell, Dave Nash and the scoring machine Dave Robisch.

But it was a guard, Jo-Jo White, who first captured my heart. Jo-Jo could do it all, score, handle the ball, and play defense. Add in his outstanding NBA career with the Boston Celtics and you could argue that White is the greatest guard to come out of the Jayhawk program. That's saying a lot. Kansas, especially in the last 30 years, has had an amazing number of outstanding point guards.

Darnell Valentine may be the most impressive physically. I was lucky enough to see him play in high school. He's by far and away the best high school player I ever saw. The Wichita Heights team that he led to a state title in 1977 was the greatest in Kansas high school history. Valentine's squad demolished a very good Wyandotte team led by future NBA player Larry Drew. 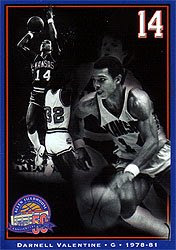 Valentine led some very good Kansas teams but bad luck kept them out of the Final 4. He was a great ball handler, could score and was the best defensive player at the point that KU has ever seen. Sorry Mario. In a program other than Ted Owens' walk the ball up and feed the big man system Valentine could have been a world beater.

Other greats have come through the years. Many of them are comparable. Cedric Hunter was a lot like Russell Robinson, both tenacious defenders with average offensive skills. Kevin Pritchard and Ryan Robertson could both score and were adequate defenders. Adonis Jordan with his physicality was a poor man's Darnell Valentine, just as Aaron Miles was a poor man's Jacques Vaughn. Mario Chalmer's, while capable of handling the point, was never truly comfortable holding down that position. And then there's Sheron Collins, the human bowling ball. He will certainly go down as the best penetrator in school history if not one of the best offensive threats of the bunch.

The talented trio of Chalmers, Collins, and Robinson speak to the importance of guard play in winning a national title. Ironically the best three point guards in school history, White, Valentine, and Vaughn, never even made it to the Final 4. White lacked a top notch running mate in the back court. Delvy Lewis couldn't compete against the speed and quickness of Texas Western. Darnell Valentine had Tony Guy with him through much of his career but it wasn't enough to get KU past Wichita State and a shot at the Elite 8 in 1981. Jacque Vaughn was surrounded by more talent than either White or Valentine making it to the Elite 8 twice. But his best team which included Paul Pierce, Scot Pollard and Raef LaFrentz ran into 1997's team of destiny, Arizona.

When fans think of Kansas basketball they always remember Wilt Chamberlain, Danny Manning, and Clyde Lovellette, but it's guard play that has made the Jayhawks a force on the national stage year in and year out.
Posted by Rink's Ramblings at 11:22 AM