If you've ever laced up a pair of running shoes and hit the roads the idea of running a marathon has flashed through your mind. Every erstwhile jogger figures they've got to do just one marathon. I see it as the Mount Everest of running, whether you do it under three hours or over five hours, it's a big achievement. Now I firmly believe that if it takes you longer than six hours to "run" a marathon then there's not a lot of running going on. Penguins aren't runners.

The problem with running a marathon is what follows. It's the most painful experience for a runner to go through. The agony can last for a few days. You swear up and down, never again. Then sometime, maybe later that day, or later that same week, you think, "I could do that again and probably knock five minutes off my time." I ran my first marathon at the Kansas Relays in April 1974. At the time I was probably running about 20 to 30 miles a week. As fate would have it, a childhood friend, Kirk Duncan, was back from Stanford and was making his first attempt at the marathon. We agreed to run 7 minute pace (per mile) and stick with each other as long as possible.

Kirk was great company and the plan worked great. By 18 miles I was beginning to fade and Kirk forged ahead. He ended up running just over three hours. I struggled home but managed to make it just under the cut off for finishing in the stadium running 3:14:15. The cut off was three hours, 15 minutes.

I tried to run it again the following year but horrible weather, worse preparation, and the prospect of watching Frank Shorter run the 5000 prompted me to drop out. It's the only time I DNF'ed a marathon. A year later I would break three hours in Wichita and decided that I would quit running marathons if I ever ran slower than marathon #1. It wasn't until 2002 at the Tucson Marathon that I ran just 3:16:13, my slowest ever. That was marathon #16 and I haven't run one since.

The point of all this is my wife ran her fourth marathon on Sunday at Disney. She decided in late October that she 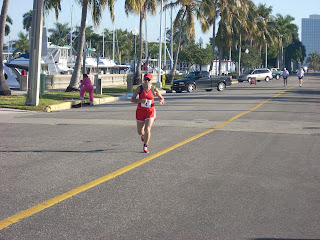 wanted to run a winter marathon. This picture was taken of her running a 10K in Fort Myers. The main requirement was that the course be relatively flat. She hates hills with a passion. She decided on Disney which left her short on preparation. She followed the training program I outlined for her to a T. I told her about two weeks ago she should be able to easily manage 9:40 pace and she wasn't sure. The Czarina (one of her many nicknames) did one second better. She ran 4:13:25, which averages out to 9:39 pace.

She was beaming because it qualified her for Boston, which she ran in 2003. While the time is a good 30 minutes slower than her best, it should be noted that she hadn't run a marathon since Boston. She's one crazy Russian. She's probably the only runner I know that's run more marathons (4) than 10K's (2).

When we got married nearly ten years ago she started running in order to spend more time with me. After dragging her to a 5K barely six weeks into her running career (where she won a medal) she vowed never to run anything longer than a 5K. Two years later she was begging me to train her for a marathon because I was going to Boston and she couldn't stand the thought of not getting to run it with me.

She regularly wins awards at races, something I rarely do anymore. And finally this fall she managed to beat me for the first time in a race. Of course I weigh about 25 pounds more than I did when we got married. But the gauntlet has been thrown down. I've got to get into some serious training, break my vow and consider a marathon this fall. After all, I can't let my wife go to Boston without me.
Posted by Rink's Ramblings at 4:01 PM