German Fernandez just set the running world on its collective ear. Every track and field fan knows by now that this freshman who attends Oklahoma State ran a 3:56.5 mile over the weekend in Fayetteville, Arkansas. Taken into perspective, Jim Ryun, arguably the greatest collegiate miler ever didn't run that fast indoors until two years after graduating from the University of Kansas. Ryun ran his then indoor world record in the mile of 3:56.4 in 1971 on a board track that at the time was considered state of the art.

Fernandez had the advantage of running on a state of the art synthetic indoor at in Arkansas, but he's barely 18 years old. Ryun was 23 when he ran his record, that's the same age as Hicham El Guerrouj was when he set the current world indoor record for the mile of 3:48.45 in 1997. Fernandez is a relative baby and here's the kicker, pardon the pun, he's a running neophyte.

When Ryun started setting records he was a veteran of an intense training system. 100 mile weeks were for Jim routine and it helped him produce two outdoor world records in the mile and win an Olympic silver medal. Fernandez hasn't com 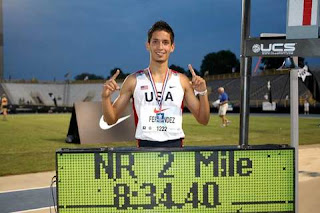 e close to running that many miles in a week. Because of injury problems his high school coach wisely monitored his mileage. His senior year Fernandez shattered the long standing high school record in the two mile and came amazingly close to breaking four minutes in the 1,600 meters in a solo effort at his state meet.

What does it all mean? It means that American distance running truly is on the comeback. Even with Alan Webb's Olympic year flame out and Ryan Hall's disappointing marathon in Beijing Americans can take heart. We're competitive again, both men and women. I think much of this distance running resurgence can be traced back to one thing, the Internet. Running sites like Dyestat and Let's Run have created this cross polination of running thought, hero worship, criticism, and most importantly, excitement.

Dyestat's coming of age nearly coincided with the emergence of Alan Webb, Ryan Hall, and Dathan Ritzenheim. The trio showed that you have to run more than 50 miles a week to be a competitive distance runner. They were trailblazers just like Jim Ryun and Gerry Lindgren were nearly 40 years before them. And not to leave the girls out but the same thing is happening with them too, hello Shalane Flanagan, I'd like you to meet Jordan Hassay.

This is great stuff for running nuts. German Fernandez may never win an Olympic medal or set a world record. But if he can stay healthy, he's going to create a lot of excitement on the track for the next decade.
Posted by Rink's Ramblings at 5:46 PM