Watching Kansas cut through Colorado in Boulder and the monstrous slam dunks from Cole Aldrich got me to thinking about how he stacks up with true centers that have played for the Jayhawks over the last 50 years. Wilt fits into that time frame so he's obviously the top dog in that group. But how do the others rate?

The Jayhawks have seen an incredible run of great low post players. The list is long, Bill Bridges, Wayne Hightower, Dave Robisch, Rick Suttle, Danny Knight, Danny Manning, Mark Randle, Richard Scott, Raef LaFrentz, Nick Collison, Wayne Simeon, Drew Gooden, Darrel Authur and Scott Pollard. The best of this group, Manning, LaFrentz, Gooden and Collison all had sweet post moves. Robisch was the king of the turn around jumper and parlayed that into a decent NBA career. Bridges and Pollard could do a little of this and a little of that and turned that into NBA careers.

Let's not forget some smaller guys who could grind in the post. Paul Pierce could get down and dirty in post. Even smal 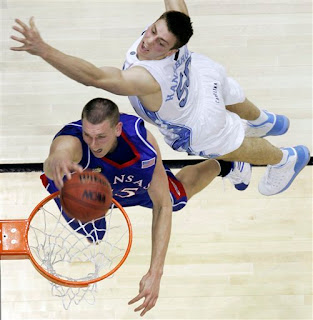 ler guys like John Douglas and Carl Henry scored a lot near the glass.

But the list of true centers is short. We're talking about guys that played with their back to the basket 75 percent of the time or more. The names that come to mind are the immortal Wilt Chamberlain, Walt Wesley, Paul Mokeski, Greg Dreiling, Greg Ostertag, Sasha Kaun, Cole Aldrich and the biggest underachiever of the bunch, Eric Chenowith. Out of this group only Chenowith and Kaun failed to make it to the NBA. Kaun may end up in the NBA yet someday. Wesley, Mokeski, Dreilling and Ostertag all had serviceable NBA careers. Mokeski's was the most interesting because he became more of an outside threat in the pros than he showed in college.

From what I've seen Aldrich could be the best of the bunch, save for Wilt. Nothing was more frustrating over the last 15 years than to watch Ostertag and Chenowith go up with half hearted put backs. Aldrich is ferocious. He doesn't hesitate to jam the ball down the basket. Add to that Aldrich's feathery touch from the perimeter and he just sticks out on the offensive end. Defensively, I don't think I've seen a better shot blocker than Cole at Kansas. If Aldrich sticks it out for all four years, Ostertag's career blocks records should go by the wayside. And he rebounds with passion. The tradition of great Kansas big men is certainly safe for at least the next two years.
Posted by Rink's Ramblings at 9:55 PM