Word arose a week ago or so that Bruce Springsteen was releasing a new album with the E Street Band and planning a tour.   The news came as something as a surprise given the passing of sax player Clarence Clemons last year.

The new disc is called "Wrecking Ball" and carries with it a theme of the lousy economic conditions that far too many Americans are dealing with on a daily basis.  You can listen to one of the new tracks "We Take Care of Our Own."  The new album will come out in March.

The Boss will face a little competition from a new disc from Wayne Riker called "Guitar Decathlon."  Wayne is an extraordinary guitar teacher and has written a ton of instructional books.  Wayne and I have met just once but I used to hang with his brother Walt in the late 70's and early 80's before Walt went on to bigger and better things as Bob Dole's press secretary.

Walt is a pretty fair drummer and helped out on a few tracks and that's how I became aware of this new musical project.  I pointed out to Wayne that he was going head to head against The Boss come March and it didn't take him long to fire back with this amazing picture. 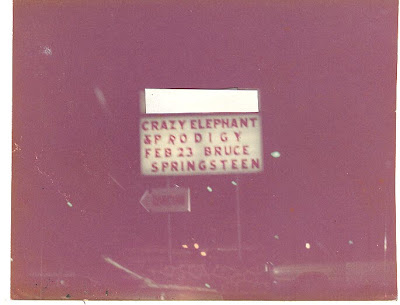 Wayne's band Crazy Elephant enjoyed top billing at the Satellite Club in Cookstown, New Jersey.  And in case you're wondering if Wayne can play and boy can he, enjoy these licks from "T Bone Shuffle."
Posted by Rink's Ramblings at 8:49 AM