Gone but Not Forgotten 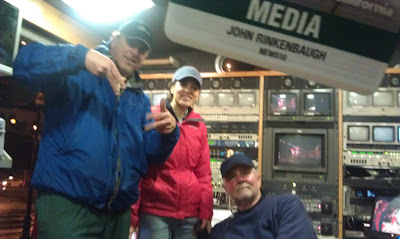 I left Sacramento more than seven months ago.  But as you can see my friends at News10 haven't forgotten me.  Big Red, the satellite truck that I tried to help kill, made the trip to Candlestick Park on Sunday for the NFC championship game between New York and San Francisco.  Word has it that this could be Red's last trip.

Big Red was a beast of a truck and in its day state of the art.  If you go back and poke around you'll see a blog about the massive truck from 2010 and how I tried to ruin it and the man seated with the smug look on his face, the ever lovable Tom Wagner.  Big Red and Tom are almost inseparable in my mind.  The gentleman standing is John Larimore, photojournalist extraordinaire.  Between these two hunks is a reporter that I didn't have the privilege of working with because Kristen Drew joined the station after I left.

I'm guessing the media pass bearing my name is a left over from the California Tour of Amgen.  I applied for the credentials so I'm guessing the PR genius who handed them out put them all in my name.  I miss the folks at News10.  I could start naming a lot of names but let's just say it's a newsroom filled with great people.  It's too bad the sports warriors, Bryan May, Ryan Yamamoto, and Sean Cunningham won't be going to the Super Bowl this year.
Posted by Rink's Ramblings at 4:52 PM