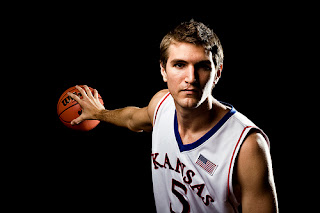 Kansas played one of the last unbeaten teams in Allen Field House Monday night, Baylor.  The first thing I noticed was Jeff Withey's hair.  The Kansas big man had sheared his long locks and the Jayhawks clipped the #3 ranked Bears by 18 points.

I can say two things after watching this game.  Baylor is a very good team that ran into the environment that is Allen Field House.  Kansas is a great team when Tyshawn Taylor and Thomas Robinson play good basketball.  I blogged at the beginning of the season that this K.U. team will go only as far as Taylor and Robinson can take them.  But halfway through this season some of the other pieces are coming together that I hadn't expected in November.

Jeff Withey is turning into a talented big man.  The guy can block shots, has amazingly good hands and someday will learn to take the ball to the rack with force.  The other surprise is Travis Reliford.  The man can flat out play defense and now he's beginning to show some confidence in his offense.  He's a bigger, stronger, version of Pierre Russell.

In fact a lot of these guys remind me of the players from that 70-71 Kansas squad.  Built like Mark Mathews,  Conner Teahan shots it like Mark Williams.  I've remarked that Robinson reminds me of Dave Robisch before so I guess that would make Withey, Roger Brown.  This team doesn't have a Bud Stallworth but Taylor can fill it up like Bud and Elijah Johnson is powerful player just like Aubrey Nash save for one thing.  Johnson can shoot free throws.

Kansas is going to hit some rough spots as it slogs through the conference.  But as I've blogged before, if Taylor and Johnson play their best, Kansas will be a team to contend with come tournament time.
Posted by Rink's Ramblings at 8:55 PM