Few things compare to a first rate sports documentary. HBO captured the essence of one of my first sports heroes, Joe Namath. Watching the 90 minute overview of one of football's most physically gifted quarterbacks brought back a flood of memories.

I can remember playing football with my friends. When I'd get my shot at playing quarterback I can remember imagining being Joe Namath, winging the ball 50 yards down the field in a perfect spiral. Of course I'd be lucky to chuck the ball 30 yards. 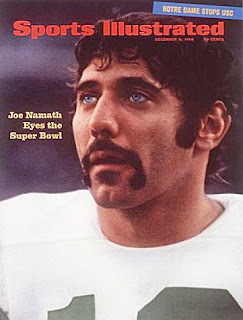 Namath is best known for his Super Bowl III guarantee of a victory in 1969. I remember watching that game, awestruck in disbelief by the way the New York Jets dismantled the Baltimore Colts. The Colts were a great football team. But Namath masterfully controlled the game and the Jets defense was ready for everything Baltimore threw at them. I became a fan of Broadway Joe there and then.

It chronicles how a small town football God from Western Pennsylvania ended up playing for the legendary Bear Bryant at Alabama.  How this hot dog Yankee ended up in a Southern football factory is a story in and of itself.  It shows how a colorblind Namath came face to face with segregation at its worst.

What struck me most about the documentary "Namath" was the amazing way he was marketed. He was one of the first rock star professional athletes. Namath was a trailblazer for today's mega-sports stars. What sets Namath apart from the Michael Jordan's, Kobe Bryant's and Tom Brady's is that he had a natural style of dealing with the media. He didn't run or hide from it but instead embraced it.

Of course he didn't live in the 24/7 sports machine that is ESPN and the myriad of sports blogs that permeate our culture. I suspect even Joe Willie would have imploded from the endless scrutiny, although he held up amazingly well in New York City. Regardless, Namath was the epitome of cool.

What I admired also enjoyed was Joe Namath was willing to share the highs and his lows. He didn't dodge the embarrassing drunken kiss me Kate moment on ESPN with Suzy Kolber. Namath owned up to it, embraced it and stopped drinking.  Joe Willie Namath is still a superstar more than 40 years after turning the world of professional football upside down.
Posted by Rink's Ramblings at 1:43 PM