The best men and women marathoners the United States has to offer lined up this morning for a crack at making the 2012 U.S. Olympic team.  For reasons beyond all rational reasoning NBC decided that this great event wasn't worthy of a webcast.  So fans who wanted to enjoy the full drama would have to avoid the Internet until 3 p.m. eastern for a two hour replay of the two races.  The telecast came nearly five full hours after the first man crossed the finish line.

The Czarina didn't want to wait and I didn't blame her so we followed the progress by way of Runner World's live blog.  Apparently the media was allowed to monitor a live feed of the race.  Guess the network didn't see the dollars that a lot of folks would have gladly paid to watch it live.

Going into the men's race it appeared three men could claim clear choices as favorites to make the team.  America's fastest marathoner Ryan Hall, the resurgence Meb Kefelizghi, and the oft injured Dathan Ritzenhein.  Hall hit the accelerator from the gun and by ten miles only five men were in the lead pack.  By 16 it was down to four with the lone surprise being another Olympic veteran Abdi Abdiraham.  Ritzenhein, who finished 9th in the 2008 Olympic Marathon, fell off the pace at 18 miles.  Ritz courageously tried to chase down Abdiraham who bonked with three miles to go but fell a heartbreaking 8 seconds short.  So Hall, Meb, and Abdi will represent the USA in London.

The women's race went out at a more leisurely pace.  But it didn't take long for Desiree Davila to inject some pace and the field began to thin out quickly.  By eight miles the lead pack was down to eight women and by 15 it was down to six.  Mixing it up with the leaders was a contender from Leavenworth, Kansas; Arizona State grad Amy Hastings.  Hastings made a bold bid to take the race after 16 miles but her effort failed and by 18 miles she fell off the pace. 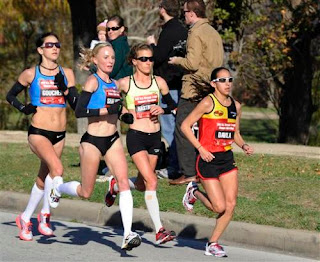 The pace had already claimed Olympic medalist Deena Kastor leaving the three favorites, Shalane Flanagan, Kara Goucher and Davila to decide the podium positions.  Hastings battled to finish a respectable 4th joining the three other runners in breaking the Olympic Trials record.  Fortunately Hastings (in the yellow top) she still has a chance to make the U.S. Track and Field team at 10000 meters.

Paul Hefferon, a product straight out of Johnson County and the University of Kansas finished the men's race in a respectable 2:16:46.  Apparently he's been training with the Hansen group out of Michigan.  At age 25 he has another shot in 2016 just as Hastings does, she's only 27.

A lot of media outlets have been crowing that the U.S. marathon team is the best ever.  On the women's side that could well be true but it's not even close on the men's side.  The 1972 Olympic team which featured gold medalist Frank Shorter, acclaimed writer Kenny Moore and walk-jogger proponent Jeff Galloway is still the standard.  Even the 76 team of Shorter, Bill Rodgers and Don Kardong would have to rate better unless Hall, Meb and Abdi all finish in the top 10 that would be a tall order.
Posted by Rink's Ramblings at 7:06 PM