What I've Learned in the Last Week 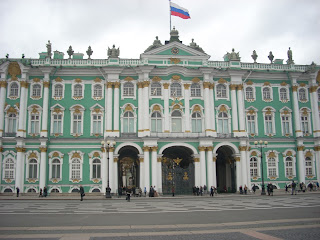 I've learned that I don't want to make another trip to Russia without the Czarina.  As we looked through the pictures and the videos that I took during my whirlwind adventure I could sense her sadness at not getting to visit a city she desperately wants to see again.  The Czarina was last in Leningrad more than two decades ago.

I've learned that despite the fact that I'm not some sterling academic with a PhD or some world renowned journalist I can deliver a clear analysis of what works and what's important when it comes to practicing the profession.  The last two trips put me before students, TV journalists from small cities in Russia and one of the up and coming local TV operations in St. Petersburg.  This time was different.

This time I had to deliver to a room full of academics, top journalists from St. Petersburg and even a couple of journalists who had flown all the way from Kazakhstan just to hear what I had to say about the state of local TV news in America, the impact of social media on it, and the growing use of multimedia journalists.  I won't lie.  I was intimidated and nervous.  Thank God I had a practice run on Monday before a group of students before I went before the pros on Tuesday.  Each day I had to stand and deliver for six hours.  The journalists were happy, the academics were happy, and the people who sponsored the event were happy.  I even got a gift from the Kazaks, two nice fellows who didn't speak a word of English.
I've learned how lucky I am to meet people like Antonia, the lovely young woman who you see at the beginning of this video.  Her mother Vera works for the consulate and is responsible for bringing me to St. Petersburg.  Antonia has worked as my interpreter for the first and third trip.  I was showing the group how my flip camera worked as part of my demonstration.  As you can see I am not the steadiest of shooters but nevertheless, the gathering enjoyed my efforts at playing photographer.

I've learned that students are becoming more precocious.  I had three students at the two different colleges approach me about getting internships in the United States.  Too bad I can't get a commission for obtaining American internships for Russian journalists.

I've learned that I've barely touched on the beautiful spots that one needs to visit in St. Petersburg.  I still haven't made it to Peterhof with its amazing fountains and gardens.  This list of museums, churches and palaces worth visiting could fill a week.  I need to make the trip when the work load isn't quite so daunting.

I've learned that Russians have the same dreams and aspirations as Americans.  They want a government that's responsive to their needs.  They want to be able to practice their profession unfettered by censorship or threats.  They want to make a fair wage for doing a good day's work.  I go list the things that make us different, but Russians are a lot more like Americans than I would have ever dared dream.
Posted by Rink's Ramblings at 7:22 PM