Silence of the Lambs

It took 12 hours of sleeping but I left the jet lag behind ready for business in St. Petersburg.  Anyone that knows me at all knows that I am a picky eater.  The free breakfast at my hotel offered some culinary challenges.  I'm not much on carrot juice or eggs or the weird hash that was waiting me.  But I did manage something resembling scrambled eggs, some toast and believe or not cucumbers.  It was the first real food I had enjoyed in 24 hours.

Then it was off to St. Petersburg State which is a very prestigious institution of higher education in Russian.  This lecture had not been included on my original list so the State Department was getting a freebee out of me.  I was told the class understood English so no translator would be needed.  That left me a little worried that I would be short on material because having to translate everything helps fill the time.

I stumbled my way through 45 minutes talking about why Americans aren't big consumers of international news and the students stared back blankly.  I tried getting them to ask questions and I was met mostly by silence until finally a couple of students, both Germans started asking very good and pointed questions.  I made it through the first 90 minutes wondering what in the heck I would do for the last 90.

I went with the tried and true and showed them videos of some very good television stories.  That finally got the questions coming.  I think they were mostly stunned by the quick, tight shots and the frequent use of natural sound.  Most Russian television news is completely lacking in pace and energy.  The storytelling is lethargic. 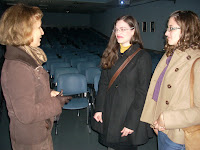 My host Vera Savko later explained to me that Russian students are usually reluctant to ask questions in class.  These two were Germans who want to come to tomorrow's lectures.  I guess they are gluttons for punishment.  Russian students apparently like to wait until after class and ask any questions in private, which did happen.  It was three hours of what I thought felt like sheer boredom but Vera and the school's dean liked it in fact the dean asked that I come back on Thursday.  Fortunately I am going to another school that I have been before and where the professor there always makes me feel like a superstar.

I declined a drive from Vera and her driver back to the hotel and took the one mile or so walk back to my hotel.  Vera's directions really didn't help a lot but as soon as I got across the river I began to recognize landmarks and found my way back to the hotel with nary a problem.  After I refreshed myself I went on another long walk, about two miles, to The Hermitage.  It was too late in the afternoon to bother paying to tour the place but it felt good to see this beautiful city again. 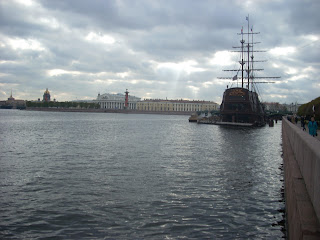 Right now I'm watching some weird Russian MTV show that is a combination of the Dating Game and stripping.  I'm not sure what to think.  Tomorrow I'm going to make it over to one of the tourists markets and go through one of the historic churches.  I'm just glad I don't feel completely crapped out from the lack of sleep.  Besides, I just have three more days to enjoy this wonderful adventure.
Posted by Rink's Ramblings at 8:44 AM