I've got about 12 hours left in St. Petersburg.  The time has flown by.  I spent the morning speaking with a Russian journalist about American traffic laws.  The Russians are pretty serious about minor traffic violations and wondered why Americans don't get into more trouble for pulling illegal U turns.  I gave it my best try and the reporter seemed happy.

I then returned to the college in the heart of the city where I made my first visit more than three years ago.  I sat in front of about three dozen fresh faced Russian students.  It was wonderful to see more boys among the group of mostly female journalists in training.  After I gave them a ten minute sermon about why they are in the midst of a wonderful revolution in which a new form of journalism is being born.  I told them the Internet is taking over and that they needed the skills of a print and television reporter along with a lot of technical ability to survive.

The students then delivered more than 90 minutes of non-stop questions.  They wanted to know all about American journalism.  I was particularly impressed with one young man who asked me what I thought about the journalism practiced by Hunter Thompson.  After the session he proudly came up to me and exclaimed that he wanted to be a Gonzo Journalist.  I couldn't have been more pleased. 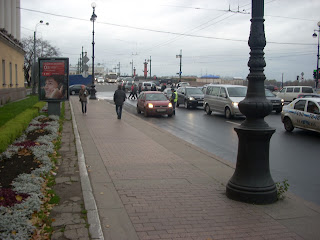 The real fun started after the class.  Vera, my Russian friend who works for the U.S. Consulate, and her lovely daughter Toni, who acts as my interpreter, were driving me back to the center part of the city so I could do a little sightseeing.  Traffic is beyond chaotic in old part of St. Petersburg.  Poor Toni got caught between traffic signals right in front of a police officer.  The officer calmly waived her over and began to ask her for every piece of paperwork imaginable.  I felt horrible.  Vera looked at me smiled and said, "this will take some time, you might as well get out and walk."  So I took this farewell snapshot, Toni in her red Ford Fusion with the police officer patiently waiting for her to find the right papers.  The cop didn't give me a second thought. 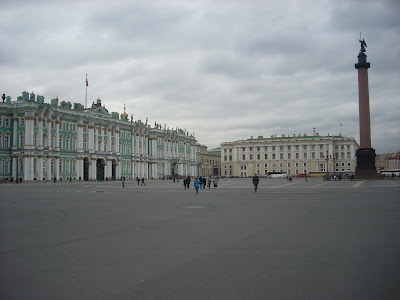 Directly across the street from where we were stopped sits the Hermitage.  It was about 3 p.m. in the afternoon and I had a tough choice to make.  Do I tour the Hermitage again or do I check out another site that I wanted to see plus pick up some souvenirs. 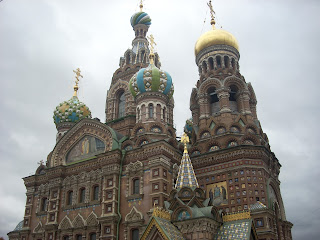 I opted for the Church of the Spilled Blood.  It was an inexpensive option and it was a moving experience.  The church is built on the spot where Czar Alexander II was assassinated.  It's domes are one of the most famous sites in the city.  Inside it's just as spectacular.  While the church is not as massive as St. Isaac's Cathedral, the beauty inside is something else.  The marble and the Icons are very impressive. 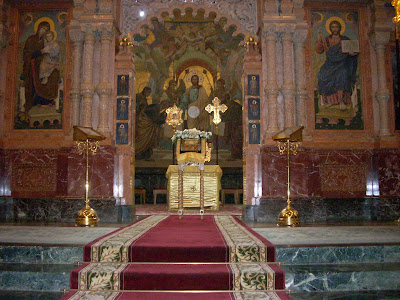 Once I had spent a half hour or so inside I headed outside to the tourist market which sits just across the street.  I spent another half hour there finding the right items.  There was a painting I wanted to buy.  It was a unique collage of the city skyline but it was priced just beyond what I wanted to pay.  My guess is that it would have been worth it and it is probably a work that will only grow in value.

I then made the two mile hike back to my hotel and stopped for a quick meal along the way.  The weather while overcast and cool wasn't as biting as the previous day.  I watched tourists along the Neva take delight in a trained bear.  I'll post many of my pictures on Facebook.  But I've got to pack now and get some sleep.  5 a.m. will come way too soon.

Posted by Rink's Ramblings at 8:25 AM