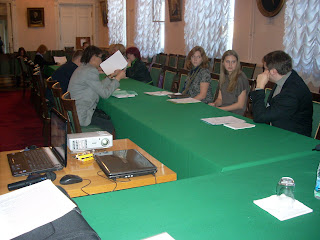 Slowly but surely they filed in.  Russian journalists and academics who had come from across the country to listen to what I had to say about American television news.  I didn't paint a pretty picture.  Let's face it, the economy has really hurt the business.  No, television isn't dying like newspapers but anyone working in TV knows to get by these days you have to learn to do more with less.

The message rang true with my Russian colleagues.  I could tell that the American way of doing things is beginning to infiltrate their lives.  They see that the practices being introduced in American news, MMJ's and the like will one day come to their country.  These professionals want to know how to adapt and survive.

It was a long day.  I spent about six hours talking and answering questions.  It's a draining experience.  It makes me appreciate the hard work American teachers put in every day dealing with a bunch of crazy kids.  I don't know how they find the energy to do it. 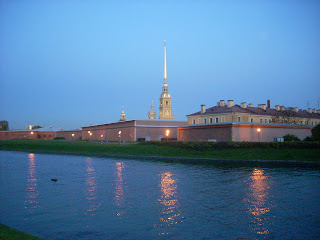 I finally got away after the lecture to enjoy a decent meal at a decent restaurant.  This is the view a mere two blocks from my hotel room and about two blocks from the restaurant.  This city is one picture postcard after another.  The setting sun glistened across the city.  I took more pictures, a few which I will post to Facebook later.  St. Petersburg never ceases to amaze.

I ended my day holding forth with a Russian Facebook friend of mine, Anastasia Tulchinskaya and two of her work colleagues from Channel 5.  It was a more intimate version of the seminar that I had conducted earlier in the day.  I can't help but admire the honest desire on the part of Russian journalists to learn all they can about the news business. 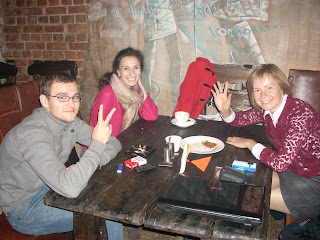