The beautiful thing about Florida weather is that it rarely rains all day.  You can almost always count on an appearance from the sun.  But as fate would have it the rains came and never dissipated this weekend in Orlando.  We made the trip to catch up with Mike and Katherine Bloemker.  Mike brought his cross country teams from Johnson County Community College hoping his squads could catch some good weather and run some fast times. 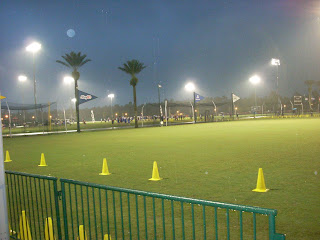 Mother nature did not cooperate.  First I want to take a well-deserved shot at Disney.  They charged $14.50 to get into the venue to watch the meet.  I could see charging 5 dollars to get into the meet but this kind of price gouging is embarrassing.  When we arrived at 7 a.m. it was overcast with a hint of rain.  By the time the gun sounded at 7:45 a.m. for the men's race a steady downpour was underway.  At times it rained buckets.  The course quickly turned to slop. 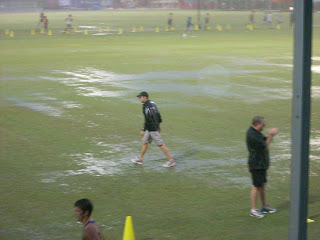 Mike's men did a remarkable job considering the conditions and finished 3rd in the team race.  Poor Mike had to scramble around in the nasty conditions while the Czarina and I hid out in some nearby stands.  By the time the women's race got going the rain started to ease up as the course got muddier and muddier.  JCCC's women executed some nice pack running and beat their main junior college competitors. 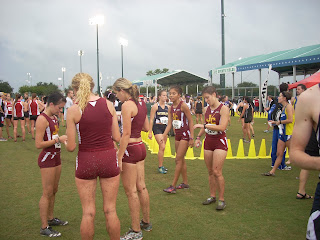 The drier conditions allowed us to get a good look at the finish.  The wet conditions slowed down the men's and women's winner by a good minute at least.  But the main purpose was to catch up with Mike, Katherine, and their bruising son Griffin.  The precocious 30-month-old was in his element, rain and all.  He enjoyed running like a wild child around the Disney complex.  It's a wonder Mike and Katherine can keep up with him. 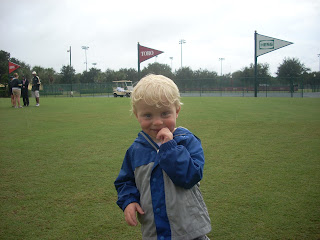 Within 30 minutes of the women's race ending the skies opened up again and it poured non-stop.  That put a crimp in our plans to check out Sea World and it shortened our shopping expedition to Downtown Disney and a nearby outlet mall.  We were relieved to return to Fort Myers on Sunday where the sun was putting in an appearance.
Posted by Rink's Ramblings at 12:44 PM