I was sitting at my desk this afternoon wondering who the third one would be. It used to be and still is a joke in every newsroom in America, major deaths come in three. Michael Jackson's passing is much like his life. It was fascinating but revolting at the same time. 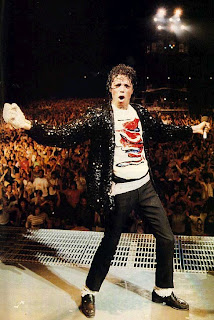 I can still remember when the Jackson's reunited in 1984 and kicked off their national tour in Kansas City. At the time I thought our coverage was overboard but looking back we probably didn't do nearly enough. After all, in the world of popular music there's Elvis, the Beatles, and Michael Jackson. I never purchased or cared to listen to his music but I don't deny his place as one of the true greats in the world of music. I also want to point out that he made MTV, and I'm stunned at the fact that MTV isn't doing squat but showing his old videos right now.

As for Farrah Fawcett, she never really did much for me. I never watched Charlie's Angels. I couldn't take her seriously as an actor or a star. She was beautiful woman and it's a shame she had such a terrible struggle with cancer.

Who couldn't help but love Ed McMahon. I grew up on The Tonight Show. Some of my best comedic memories from television come from Carson and The Tonight Show. He was an icon as a second banana, but I guess this week, Ed will have to move down two seats.
Posted by Rink's Ramblings at 5:03 PM