I was like a kid on Christmas morning a couple of days ago. A big box arrived and within it was a long promised treasure. Since the early 1990's my favorite performer Neil Young had promised to begin releasing his archives. Young has dozens if not hundreds of unreleased treasures that serious fans trade amongst themselves. The only other artist that compares in terms of the quality and volume of unreleased jewels is the master himself, Bob Dylan. 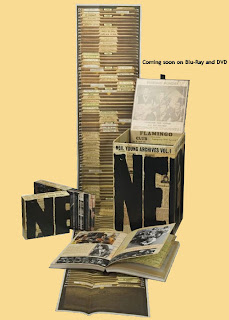 So the first of five promised boxed sets arrived on my doorstep. It's overwhelming. There's a book, ten discs, and a download card. The set covers the years from 1963 to 1971. This bounty comes with a catch. It's on Blu Ray. I don't even own a Blu Ray player.

There is method to my madness. Sure I could have bought it on traditional DVD or CD but the Blu Ray boxed set comes with the aforementioned download card. This will allow me to download all of the material onto my PC and I can make my own CD's or put them on my mp3 player. The other wonderful thing about Blu Ray is it's upgradeable. Neil has promised that when he finds material that belongs to that archive set, you'll be able to download it to your collection. In fact he's already got the first download ready to go. Now how cool is that?

The set is a game changer. Other artists with vast catalogs looking to cash in on the buying habits of their loyal fans are going to have to take a serious look at what Neil has put together. The collection includes files full of personal photos, video clips, and in the instance of this set, a complete movie that he filmed back in 1971.

I plan to start downloading the music this weekend. The Blu Ray player will have to wait. In fact, I may buy a PS3 which is even better because then I can play games, but don't tell the Czarina!
Posted by Rink's Ramblings at 8:07 AM