As much as I want to complain about the heat, I can't. I just looked at the heat index in Kansas City at 8 p.m. It was 108. It's been boiling here the last five days. The Czarina and I like to run in the evenings after work. In the spring hitting the roads at 6 p.m. is a pleasure. But now we try to hold off until 7 p.m. or a little later to try and mitigate the heat. 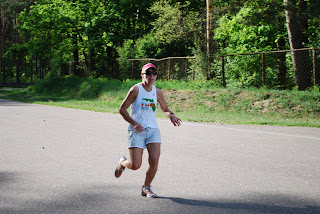 The Czarina in the cooler climate of Riga
The last two days have been especially brutal. The Czarina ended up walking, not only because of the heat, because of bathroom problems. It's not a pleasant thing to be out on a run when there are no facilities in sight. I've had to head to the bushes about a half dozen times in my life. She made it to the county park about two miles from the house but they had already locked up the restrooms for the evening.

It was even worse for her last week when a fierce thunderstorm forced us to the clubhouse for our evening workout. She was trying like crazy to make it to a mile and a half on the treadmill before heading to the toilet. Unfortunately her judgment cost her big time. Fortunately there were showers in the clubhouse restroom. The Czarina was in ill humor after this accident, not her first I might add. It seems to plague her more than it does me. I took her to Dairy Queen to soothe her angst and by the next day she could laugh about it.

The one thing I've learned through the years of running is to never eat a salad before a run or the night before a race more than a 5K. I found that out the hard way at the St. George Marathon in 1988. The only thing that saved me was the porta-potty that magically appeared about two minutes the urge had hit me at about the ten mile mark. The detour only cost me a minute. The weight loss must have helped that day because I ran a PR by about a minute that day.