The state of Kansas has a history of producing some quality milers and distance runners. Fans of the sport know the likes of Glenn Cunningham, Wes Santee, and Jim Ryun. Hardcore fans will know John Lawson, Randy Smith, and Christian Smith. Occasionally one of these distance running gems will escape the clutches of Kansas, Kansas State or Wichita State like Steve Fein who went to Wisconsin before heading to Oregon or Dwight Davis who landed at Tulsa.

Then there are the kids who saw talent and potential in high school but lack the credentials to go to a Division One school. I saw one such youngster run a couple of times his senior 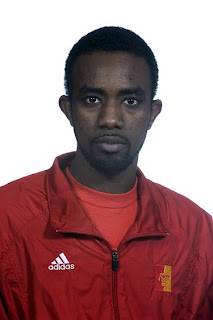 year at Free State High School. One race in particular I remember watching Mujahid Hassaballa run was four years ago at the 6A cross country regional. He chased Tim Testa from Junction City for most of the race but came up short.

Hassaballa is originally from the Sudan. He came with his parents to the United States in 1999. While he was a very good high school runner, Mujahid was never a champion. I don't think he ever broke 4:25 for the high school mile.

Like a lot of good Kansas high school distance runners that the big schools turn there nose up at Hassaballa ended up at Pittsburg State. The Gorillas are better known as a Division 2 football factory but more than a few quality track and field athletes have landed at the school located in the southeast corner of Kansas. Turns out Mujahid is one of them garnering All-American honors this spring in track. He ran the metric equivalent of a 4:07 mile. That's a pretty darn good time... and it makes him a runner that both Kansas and Kansas State would be more than happy to have on their team.

Its athletes like Hassaballa that may speak to why Kansas fired its distance coach. Doug Clark was first rate at turning very good runners into great runners. But he was having a heck of a time recruiting kids like Muhahid Hassaballa to KU. The Jayhawks have always had a problem recruiting in state with a few notable exceptions. Here's hoping that the new coach doesn't let kids like Hassaballa slip away.