1987 was the year I was going to run a 2:45 marathon.  I was in the best shape of my life.  I had a steady spring of long runs that included some first rate workouts.  I remember running 15 miles with 5 repeat miles thrown in at 5:30 pace in the middle of the run.

On my last long run of 23 miles two weeks before my target marathon my coach, Tom Dowling, wanted me to run the last five miles at 6:30 pace.  I remember it was a warm Sunday morning in early June.  I had run with a group of four others at about 7:20 pace when we got to 18 miles.  Dowling must have put two of them up to making sure I ran the last five at the suggested pace.  We were flying and I was fit.  I put them away after two miles and averaged under 6:30 to wrap up the run.

The target was Grandma's Marathon in Duluth.  It would mark my second run at Grandma's.  I knew the course.  The race offers spectacular views of Lake Superior with gentle rolling hills.  The weather traditionally the third weekend in June was usually cool.

But my plans were thwarted by a couple of things.  My work life was in turmoil.  I wanted a promotion I wasn't getting.  I decided to go for a position within the company in Phoenix that offered a chance for advancement.    I didn't tell my boss.

The Monday before the big race I was offered the job.  I remember going out that night with my then girlfriend to discuss the opportunity.  We ate at a South Kansas City tavern and I got a terrible case of food poisoning at dawn.  I had terrible diarrhea and was vomiting.  I was no condition to go to work.

My phone rang at 9 a.m.  It was my boss.  I hadn't even called out sick yet due to the fact that I didn't go to work until 1:30 p.m.  He started screaming at me about the Phoenix job.  I was shocked that he knew.  I hadn't even accepted the position.  His attitude about my apparent lack of loyalty helped me make my decision to leave.

So just five days out from the big race I was suddenly faced with the fact that I would be moving to Phoenix in July.  What I didn't know was that bought of food poisoning would leave me depleted of vital minerals when I toed the line on Saturday, June 20th.  Worse still it was unseasonably warm at the start of the race.

Grandma's that year was hosting the USA women's national marathon championship.  Coach Dowling had arranged for me to run with one of his old friends, Kathy Northrup, who was hoping to run an Olympic Trials qualifier in 2:45.  I stood right behind the women's pen which occupied the front of the starting line.

It didn't take long for everything to be sorted out at the start.  Kathy and I were running along, side by side, rather easily.  We were running along at 6:20 pace.  It felt pretty easy for the first ten miles as we were out in around 64 minutes.

The heat was taking its toll and I could tell the Gatorade that I had downed before the start in hopes of holding off dehydration wasn't sitting well with my stomach.  Somewhere before mile 16 I let Kathy know I could no longer hold the pace.  She pushed on ahead looking for her OT qualifier.

I began shuffling along at 6:50 pace.  It felt incredibly easy but any attempt to push any faster left me feeling queasy.  The heat was now stifling as I passed the 20 mile mark.  It was shortly after 20 that I saw Kathy ahead getting on board a shuttle bus that was picking up runners, laid waste by the heat. 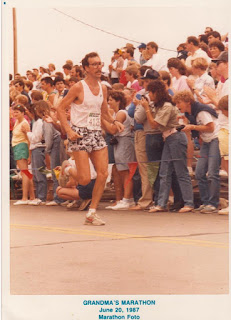 I was handed two tickets for free beer after hitting the finish.  I was drunk as skunk one hour after the finish on two beers.  The days that followed were awful.  I could barely walk.  My legs were beaten to a pulp.   I chalk that up to the dehydration and food poisoning.  I only managed to run three times over the next two weeks.

By July 5th  I was living in Phoenix.  I tried to resume training.  The heat was impossible.  Looking back at my logs that I now kept thanks to Coach Dowling I managed my first long run post marathon on July 18th.  It was 16 miles with a group led by Craig Davidson.  It was the start of a friendship that endures to this day.  But it would another nine months before I would tackle the marathon again. 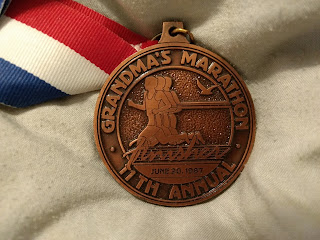 Posted by Rink's Ramblings at 7:54 PM