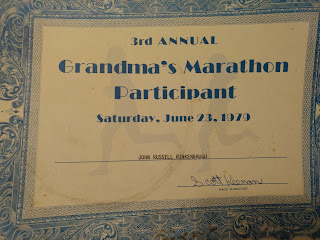 Validating a sub-three hour marathon became a big deal to me.  My junior year in college I had managed to break three on a minimal amount of training.  Two years later, now out of college and working full time in Minneapolis at the NBC affiliate I saw an opportunity to run another marathon.

Grandma's was a relatively new marathon and I had heard a lot of good things about it.  I knew that I could get a relatively decent amount of training in beginning in April when the brutal grip of winter begins to ease in the Twin Cities.  I had three months to prepare for the late June race.

I was living in a part of the city that afforded me easy access to running around Lake of The Isles... a lake then known as Lake Calhoun and even Lake Harriet for extremely long runs.  I probably averaged 40 miles a week with a long run of 15 miles over the course of the lead up.

A co-worker, reporter Dr. Michael Breen told me in March he wanted to run the race as well.  It would be the good doctors first marathon.  He was short on training when he joined me for our only run together leading up to the race in May.  Breen ran step for step with me for 12 miles.  He pushed me all the way and was feeling pretty pumped up about what was to come.  I warned him that 12 miles isn't 26.

I ran no races in preparation for this marathon, probably not the smartest of moves, but I was about as fit as I had been for my 1977 marathon with a little less leg speed.  Saturday June 23rd dawned with perfect weather and nearly 1,300 runners were off.  I had let the local Duluth NBC station know I was running the race.  They actually captured video of me running which I have to do this day.

Second, shortly after ten miles marathon elite, the late Steve Hoag passed me chatting with a couple of buddies with his arm in a cast.  Steve had finished second to Bill Rodgers at Boston.  Their remarks were like a punch in the gut.  Steve said, we can push it and run 2:35 or take it easy and run 2:45.  I knew I was in a world of shit.

It started catching up with me after 19 miles.  The slow die began but I had banked enough time to break three hours, then the third unforgettable thing rolled up.  I could smell it coming and when I looked to my right, I spotted a woman who had soiled herself, crap running down the length of her right leg.  The stench was undeniable.  I had to back off and let her get a big enough gap so I didn't have to look or smell the running shit can.

I got to 25 miles knowing I had almost no margin of error to break three hours.  I busted a gut, thankfully didn't see the shit girl.  I could see the clock from about 200 yards clicking up to three hours.  I hit the finish in 2:59:50, in 256th place and extremely happy with my effort.

I stood around waiting for Dr. Breen.  I first saw NFL great, Alan Page, a Vikings defensive line man complete his first marathon in 3:57.  Mike never finished the race.  He gave it up at around 22 miles admitting that things began to fall apart at around 16 miles.  He had gone out too fast, overly optimistic about our 12 mile run together.   The marathon is a demanding beast, no matter your relative fitness.
Posted by Rink's Ramblings at 7:50 PM