It hit me in the heart.  Frank Robinson is dead.  I wasn't an Orioles fan, or the Reds for that matter.  I was and am to some extent, a baseball fan.  Robinson was a superstar when baseball was still America's national past time.

You can read much better articles about why Frank Robinson mattered.  In my estimation he is the second most important African-American to put on a major league uniform, behind only Jackie Robinson.  My heart ache stemmed from my feeling that Robinson never the full respect or due for his incredible career both on and off the field. 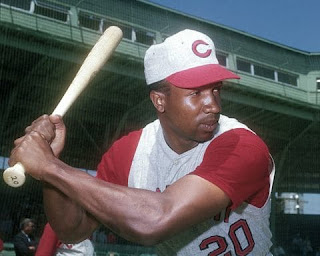 Imagine being a 20-year-old breaking into the major leagues in Cincinnati in 1956.  Cincinnati was racist as hell.  What he must have endured making his way to winning Rookie of the Year honors and hitting a then major league record 38 home runs for a rookie.

Just five years later Robinson would lead the Reds, which had been a joke for the better part of 20 years, to a National League pennant taking the league's Most Valuable Player award.  His Reds had the misfortune of playing one of the greatest Yankee teams ever in the World Series and so it goes.

Five years after that Robinson was gone from Cincinnati. I remember reading he was an "old" 30.  He had only hit 33 home runs, drive in 100 runs and hit 296 in 1965. I remember writers calling Robinson a difficult and angry player.  Writers said he was difficult and angry.  Even then as a young boy, the descriptions spoke to me of a proud man, who didn't suffer fools gladly, a proud Black man which made it even worse.

In 1966, old Frank would hit 49 home runs and win the Triple Crown for Baltimore in leading them to a World Series title over my beloved Sandy Koufax and the Los Angeles Dodgers.  Robinson won the American League's Most Valuable Player award becoming the first and only player to win the MVP in both leagues.   He would follow it up with three more trips to the World Series and bring one more crown to Baltimore.

Fittingly he became the game's first Black manager in 1975 and managed four different times over the next 20 years.  Robinson's team's never had the best talent, but they always played better than you expected.  His pride in the game, the drive to win, he willed upon those who played for him.

He was one of my early baseball heroes.  The game owes him more than I can even begin to literate.  A giant among us is gone.

Posted by Rink's Ramblings at 8:06 PM