Some marathons are made to be forgotten.  So it is with the fourth marathon I attempted.  I can't remember why I decided it made sense to run a marathon in the fall of 1981.  Since the Grandma's marathon of 1979 my running and racing was sporadic at best.

I had moved to Little Rock in March of 1980.  I trained fairly regularly despite a summer that turned hotter than hell.  I can remember going into work at 1 p.m. during the months of July and August and seeing a bank clock hitting triple digits.  I did most of my three to five mile runs at night, after 11 p.m.  It was the only way to survive the hottest summer on record in years.

I ran only one race in Little Rock.  It was a 10K in September.  I was over-matched and ill prepared and barely ran 42 minutes.  A month later I had moved to Kansas City for a better television job and the running was on again, off again throughout the winter and spring.

I ran the 1981 Hospital Hill Half Marathon.  I must have been in decent shape as I broke 1:30.  The time was still a good five minutes slower than my best half at the time but at some point in the weekend after the early June race I had decided to run a marathon again.

It would be another year before I raced again.  First, I ran a 10K in Louisburg, Kansas finishing somewhere in the top ten in 39 minutes.  This was the first weekend in September.

I checked the calendars and had decided on a late September marathon in the little southwest Iowa town of Lamoni.  The town is home to Graceland College, which produced 1976 Olympic decathlon champion Bruce Jenner. 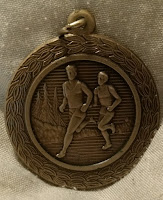 I arrived in Lamoni having no idea what to expect.  One thing was clear as I toed the line with more than 100 other runners, it was going to be hot.  Organizers were starting a 10K, half marathon and marathon together.  So figuring out my competition was a little difficult.

The marathon course consisted of two large loops, some paved, some gravel and some brick with a mix of gentle, rolling hills.  When the gun sounded I found myself out in third place among all of the runners and that's where I would stay through the first loop. Second place was out of sight and I could see no one behind me.

Somewhere after 17 miles I rolled up and passed the second place runner.  First was a good 20 minutes ahead of me.  The last loop became pretty intense over the last six miles.  I negotiated the brick streets over the last two miles praying for the finish line which I crossed just under 3 hours and 12 minutes.  I had a second place medal to show for a race that didn't offer a lot of competition.

At this point in my life work and not running was becoming a bigger and bigger priority.  I would run the occasional road race after that, but my marathon running days seemed to be behind me.  It would be two years before I decided to give 26.2 miles another go.
Posted by Rink's Ramblings at 8:12 PM