I turned 30 at the end of 1985.  I came to my December birthday having decided to take my running a lot more seriously.  The change was sparked in part from my time volunteering as an assistant cross country coach at Rockhurst High School.  Two of the Rockhurst runners had caught my eye.

Tom Spencer and Matt Blake didn't do the majority of workouts given by the head coach.  They spent most of their time running a lot of miles.  Both were good high school runners, but not great.  Yet I could see through the work they were doing, these two seniors were getting the most out of their abilities.  Both urged me to sit down with their private coach, Tom Dowling.

I've written about Tom before.  He was different from any coach, any runner, I had ever encountered.  He asked me to do things that I didn't believe I could do.  He sucked me into a world of running that I really didn't know existed.

I had been coached to run intervals.  I ran a lot of intervals, even throughout the first five years of the 1980's.  I did a lot of 440's, a lot of 440's.  Tom said the track work was over.  He wanted me to focus on miles.  It was a lot of miles and a weekly tempo run thrown in and the goal of breaking 2:40 in the marathon.  Tom said it would take time to get there.  It could take three to five years.

I went through the winter, spring and summer of 86 piling up the miles.  My late spring races showed promise.  My trouble was staying injury free and when my old habits would get the best of me I would pay for it.  I couldn't keep myself off the track.  When I would run intervals I would usually find myself gimpy.

Prime racing season gets underway in September in Kansas City.  I had run a couple of 10K's in the low 36 range.  I begged Dowling to let me run the Kansas City Marathon in November.  He said I could do it on one condition.  I had to run it as a training run.  That meant no racing.  I agreed.

The 1986 edition was on a gnarly course.  It featured a lot of rolling hills over the first eight miles with a monster hill at 9.  After mile 10 the course went on for a gentle downhill 6 mile out and then it was a slow ascent to mile 25 before you worked your way up one final monster hill.

I went out at a pace that felt comfortable next to a runner I knew from Lawrence, Bill Reetz.  Bill planned to break three hours.  I was supposed to be running 3:15 or so.  I went by Dowling at three miles.  He was screaming at me for going too fast.  We went through in 18:30.

It all felt so easy and I didn't even mind the monster hill at 9 miles where Bill fell by the wayside.  Tom Dowling was again at the ten mile mark with a wry smile on his face.  I went through in 63:30.  He yelled slow down, you might run 2:45.  I was confused.  I knew he didn't care at this point what I did but this was all feeling way to easy.

The weather was good for November 16th.  The next 14 miles were uneventful but I could tell I was starting to slow after 21 miles.  Part of it was the gradual climb to the finish, part of it was the toll of running in unknown territory.  By mile 24 I was beginning to hurt.  The last mile was hell.  The uphill was excruciating as I turned to run the final .2 to the finish.  I could see the clock... 2:49... tick... tick... tick across the finish in 2:49:34. 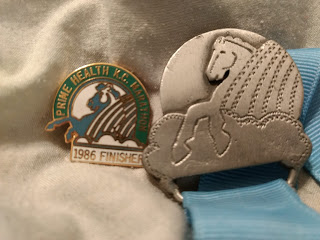 I collapsed into my girlfriend's arms.  I had never been so spent.  I was suffering a terrible sugar crash and was on the verge of passing out.  Dowling was there with a Coke and I started to revive.  It was an eye-opening run.  I had finished 26th overall and even took an age group award finishing 4th.  It told me that I was on the right path in my training.  Lydiard style training suited me to a T despite the chaos of my television work life.
Posted by Rink's Ramblings at 8:00 PM